A convenience store owner is being hailed for his kind act towards a teenage shoplifter he caught stealing from his store.

Jitendra “Jay” Singh, the owner of an Ohio 7-Eleven, was informed by one of his staff that there was a customer acting suspiciously. When he reviewed surveillance video, Jay saw the teenager picking up items and hiding them in his clothes.

Rather than call the cops on him, Jay confronted the boy who then told him he was stealing the items for himself and his younger brother.

“I’m stealing it for myself. I’m hungry and I’m doing it for my younger brother,” the teenager said.

What Jay did next has earned him the praise of social media users. Jay told the teenage shoplifter to grab some pizza and other snacks free of charge. He let the boy go with all he took and didn’t report him to the cops. 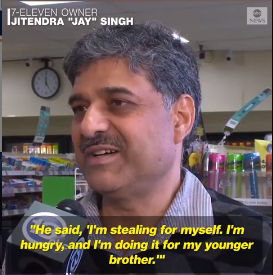 When Jay’s kind act got out, neighbours testified about the kind of person he’s always been and praised him for his kind heart.

When being interviewed, Jay was asked why he didn’t call the cops on the boy and he replied: “If he goes to jail then he’s definitely not going to do anything good in life.”

Watch the video below.