An Oregon woman lived for 99 years with a rare condition that meant her organs were located in the wrong places and this wasn’t discovered until her death.

Rose Marie Bentley had an unusual anatomy but neither her family nor Bentley knew about the potentially life-threatening condition until after she died on Oct. 11, 2018.

According to Oregon Health & Science University (OHSU) researchers, Bentley had situs inversus with levocardia, which means her stomach, liver, and other abdominal organs are on the right side of her body while her heart remained on the left side.

The condition occurs once in every 22,000 births and it usually means the person will have “life-threatening cardiac ailments and other abnormalities,” said the release. 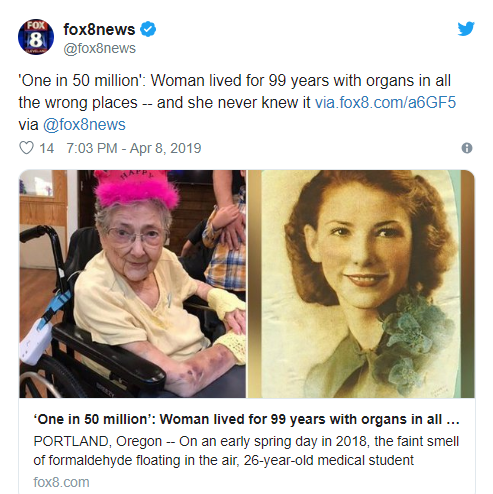 But Rose Marie Bentley lived a full life. She was an avid swimmer, raised five children, helped her husband run a feed store and lived to 99, according to The Guardian UK. It was only after she died that medical students discovered that all her internal organs, except for her heart, were in the wrong place.

The discovery of the rare condition was presented this week to a conference of anatomists, leaving them astounded, especially because Bentley had lived so long.

The finding was made when the class of Cameron Walker, an assistant professor of anatomy at the university in Portland, was examining the heart of a cadaver (Rose Bentley’s body) last year. Bentley had agreed to donate her body to OHSU, Oregon’s only academic health center.

While examining the body, they noticed the blood vessels were different. When they opened the abdominal cavity, they saw that all the other organs were on the wrong side. The unusual blood vessels helped the heart compensate.

“I knew something was up, but it took us a while to figure out how she was put together,” stated Cam Walker, Ph.D. in the news release.

Fascinated by this, Cameron Walker researched the life expectancy of people with the condition and he found no documented cases in which a person lived beyond age 73.

Bentley, who lived in Molalla, 25 miles south of Portland, had led a normal life. Her family reported that she lived without any chronic illnesses aside from arthritis. 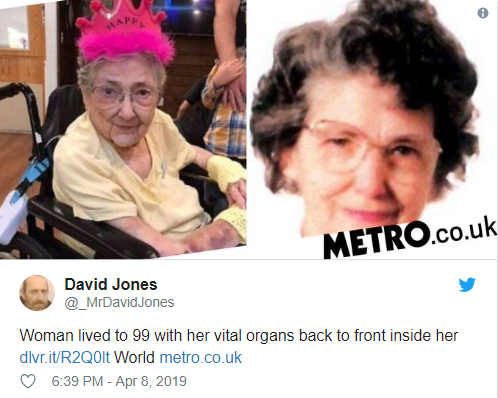 But there were signs, The Guardian reports. When Bentley was in her 50s, she had a hysterectomy, and the doctor also wanted to remove the appendix. But he couldn’t find it, Bentley’s daughter, Louise Allee said.

When Bentley had her gallbladder removed about a decade later, it was on the opposite side of where it should have been, Allee said.

“She had three organs removed during her life, but only a surgeon who removed her appendix recorded its unusual location in their notes. None of Bentley’s children were aware of their mother’s transposed organs, and they believe she didn’t know, either,” said the release.

Mark Hankin, Ph.D., a professor of anatomy at OHSU, presented the woman’s case on April 8 at the 2019 American Association of Anatomists Annual Meeting at Experimental Biology.