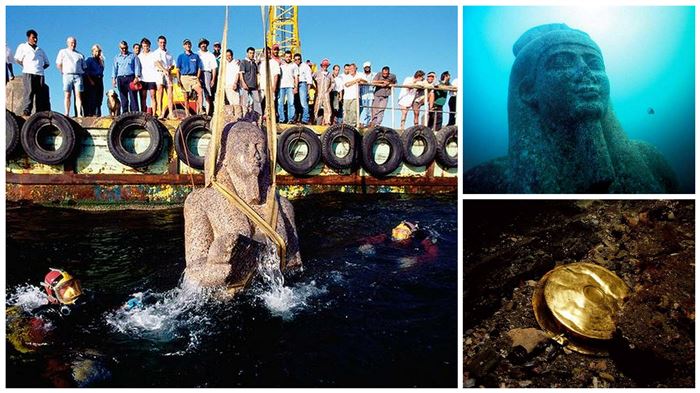 The Lost City of Heracleion

Once a bustling metropolis, this long-lost Egyptian city flooded, sank, and was forgotten — until archeologists rediscovered it.

When people think of archeology, they typically think of people laboring in the hot sun, or maybe underground. But those excavating the ancient Egyptian city of Heracleion have exchanged their sunblock for scuba gear. According to science writer Laura Geggel, the lost city was first discovered off the coast of Alexandria, Egypt in 2000, and has been the subject of regular excavations ever since. Despite the tough working conditions, the drowned city routinely reveals wonders, including mostly recently the remains of a temple, gold jewelry, coins and the missing piece of a ceremonial boat.

Anne-Sophie von Bomhard writes in the Journal of Egyptian Archaeology about some of the more fascinating discoveries from Heracleion. The city, named for the ancient Greek hero Heracles, spanned a period of Egyptian history before and during Greek influence. Its Egyptian name was Thonis and the city is frequently referred to as Thonis-Heracleion.Intricate ceramics have been found, including a glazed, highly realistic-looking cobra.

Some seemingly mundane discoveries, such as walls, have provided some of the most telling information. Combined with studies of sediments, the walls reveal that the city apparently consisted of different districts, separated by waterways. One massive temple sat along the banks of a massive waterway that archaeologists have dubbed “The Grand Canal.” The Grand Canal connected a port/harbor to a large natural lake, sort of like modern-day Seattle. Within the canal and the ports, shipwrecks and maritime artifacts have been discovered.

Remarkably, despite the passage of thousands of years and the sinking of the entire city, small artifacts have survived as well. Amulets and statuettes depicting both Greek and Egyptian deities were found near the foundations of various buildings, as well as carved wooded naos, or small shrines that held statues or other artifacts. Amazingly intricate ceramics have been discovered, including a glazed, highly realistic-looking cobra.

The artifacts are spectacular enough, but the city’s watery fate demonstrates another way in which the discovery benefits modern scholars. Based on artifacts and radiocarbon dates, Jean-Daniel Stanley and Marguerite Toscano were able to determine that the city was founded around 2,700 years ago.

It flooded and sank around 1,500 years ago. Based on Heracleion’s and other cities’ current depth, the researchers were able to determine the rate at which the entire coast subsided. The city sank in pieces, with some sections subsiding faster than others. Located at what was then part of the mouth of the Nile Delta, the city was never far above sea level. Periodic high floods would have hastened the city’s demise, but building temples and other heavy structures on what was unstable soft sediment was disastrous. The city effectively sank under its own weight.