Queen Letizia of Spain has been tested for coronavirus after a government minister she met recently was diagnosed with the disease.

The former journalist shook hands with equality minister Irene Montero as she arrived at an event last Friday in Madrid they both attended.

And the pair were pictured giving each other the traditional Spanish kiss on the cheek as Letizia left the meeting with an association caring for prostitutes.

Confirmation the royal had been tested along with Spanish King Felipe VI came after it was announced Mrs Montero had become the first Spanish government minister to go down with coronavirus. 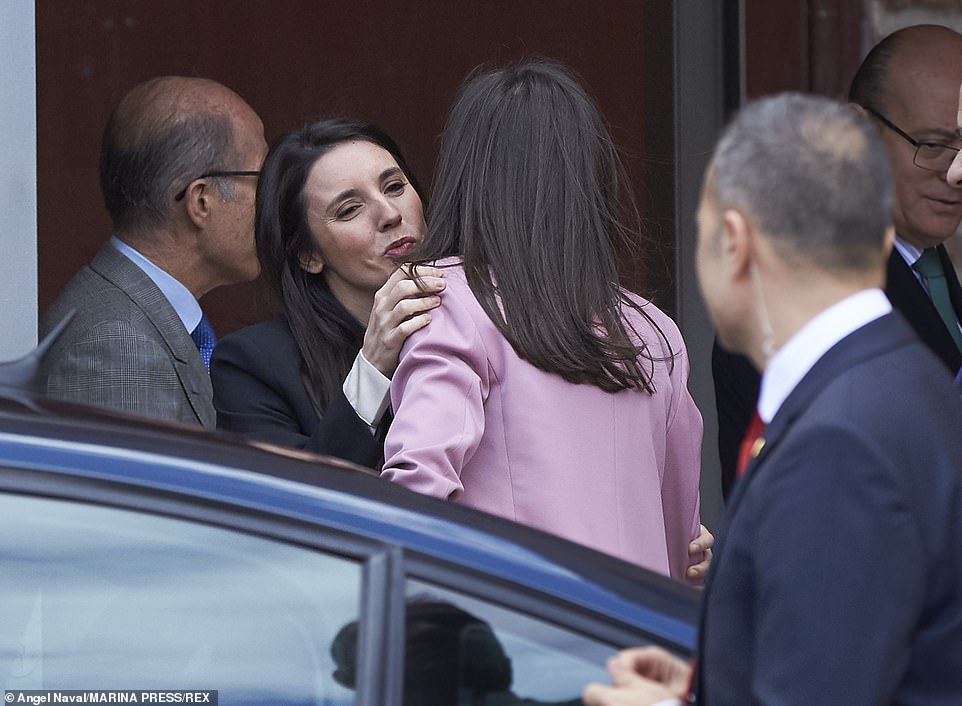 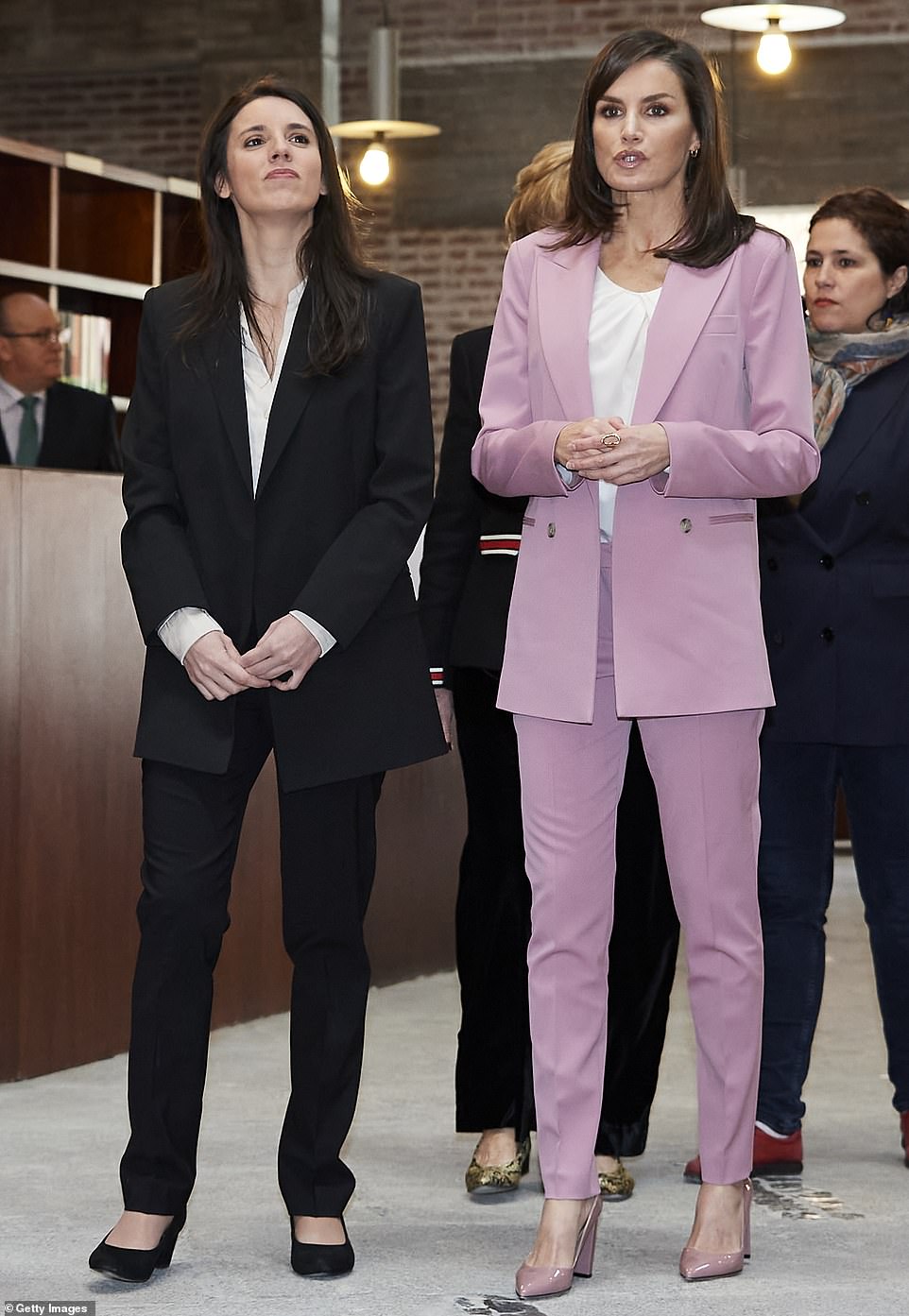 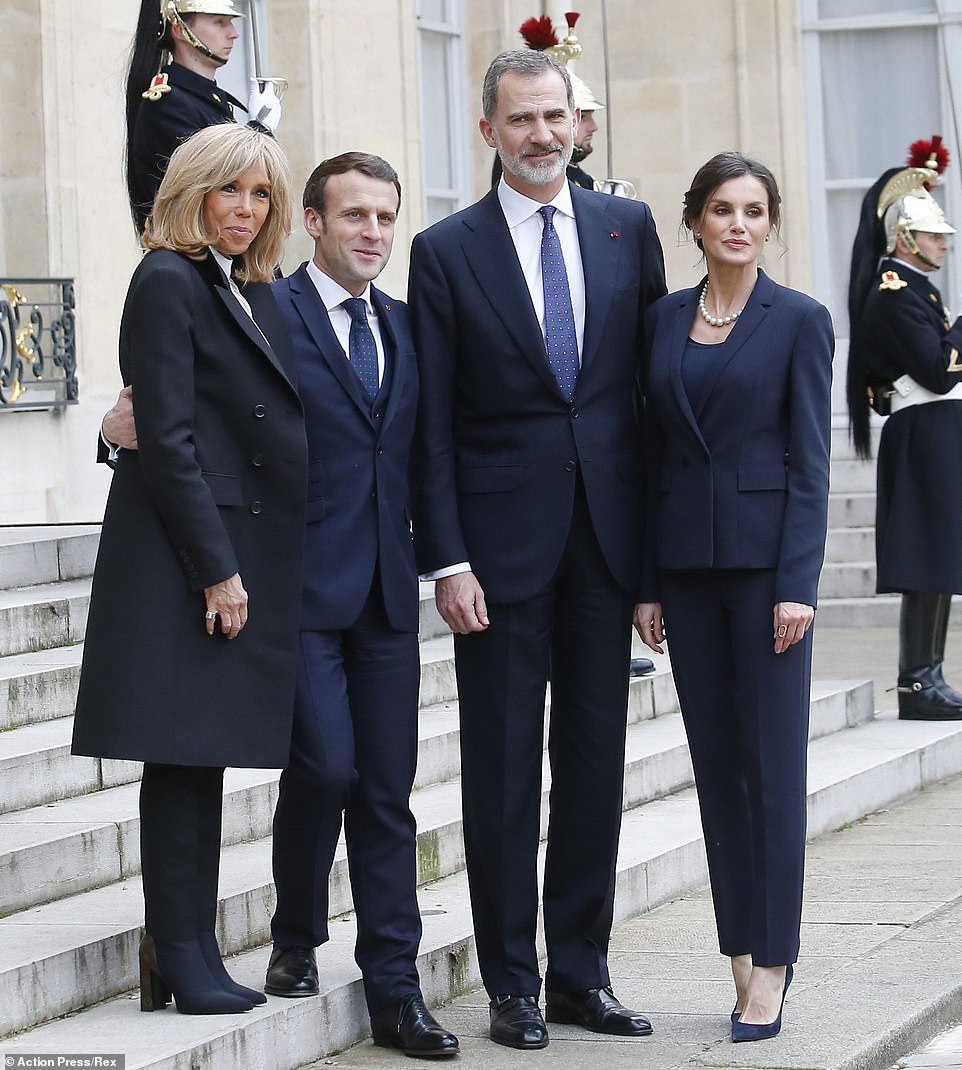 She and her partner Pedro Iglesias, one of Spain’s deputy PMs, have both been quarantined.

A Spanish Royal Family spokesman confirmed the tests on the monarchs were taking place because of Queen Letizia’s ‘recent public activity’ and government advice.

The results are expected to be made public tomorrow. 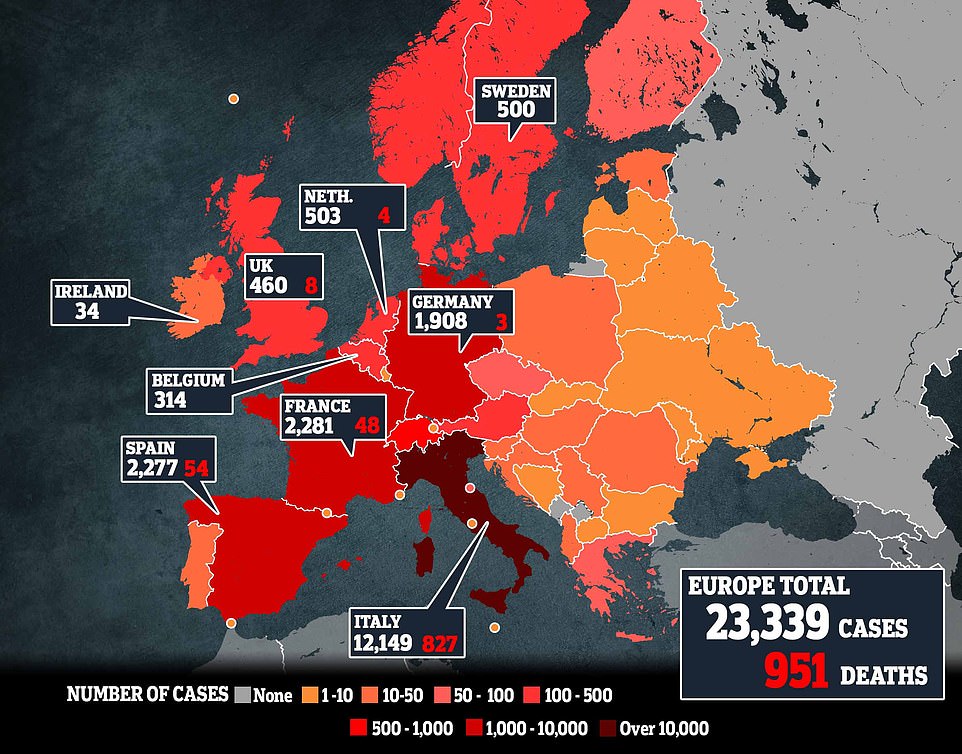 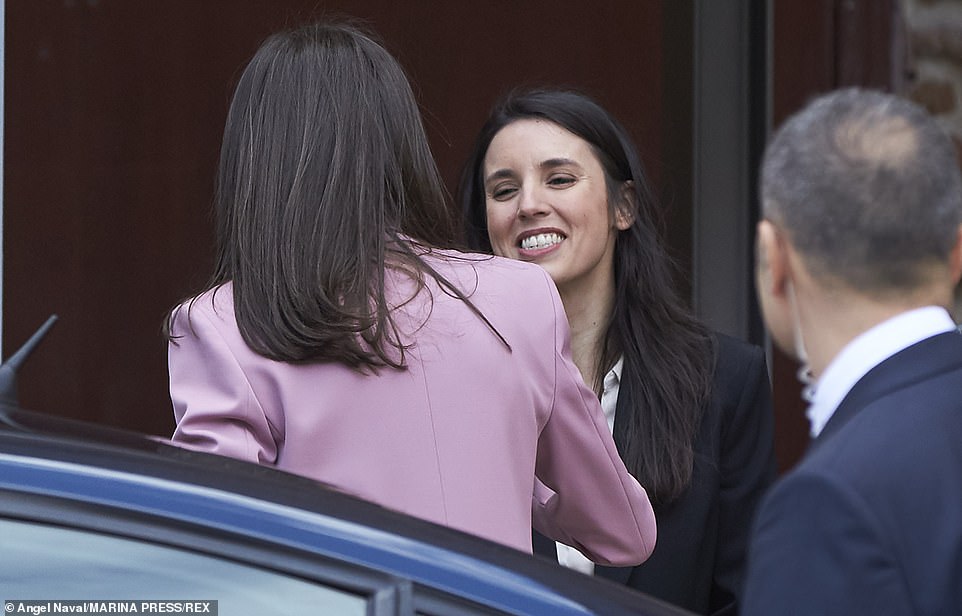 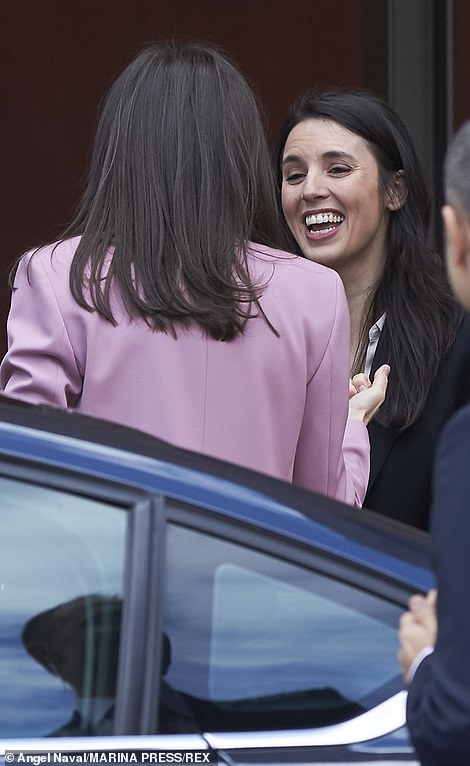 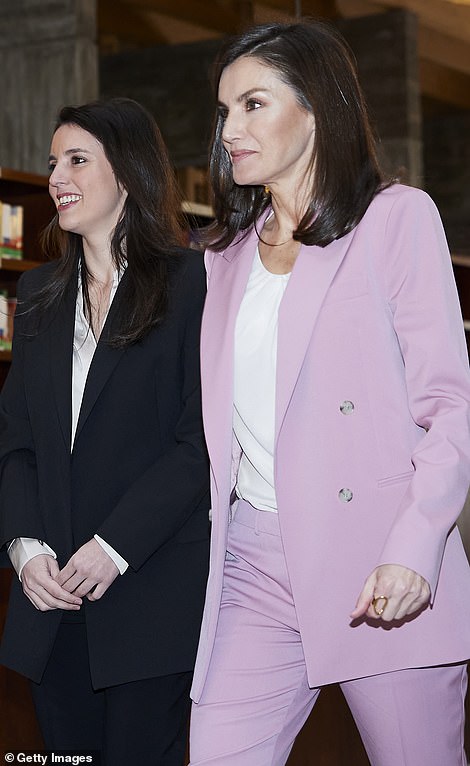 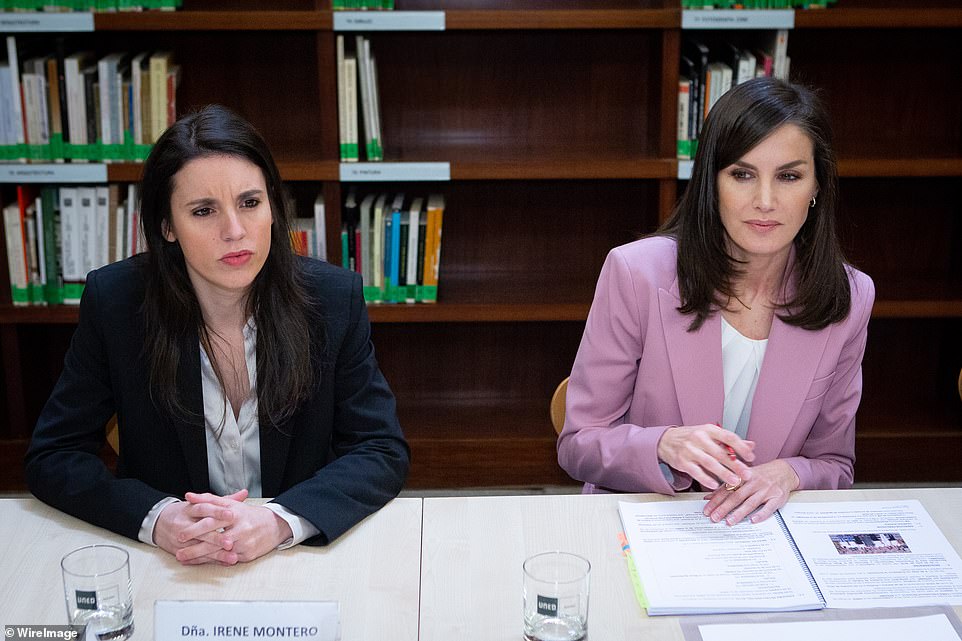 The pair sat together during the meeting, just days before Mrs Montero tested positive for COVID-19 and went into quarantine 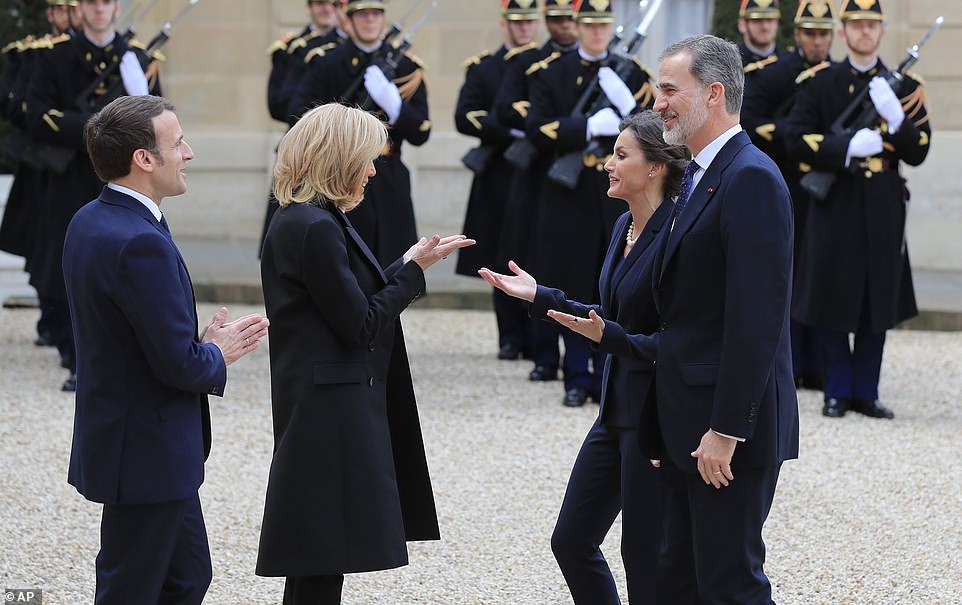 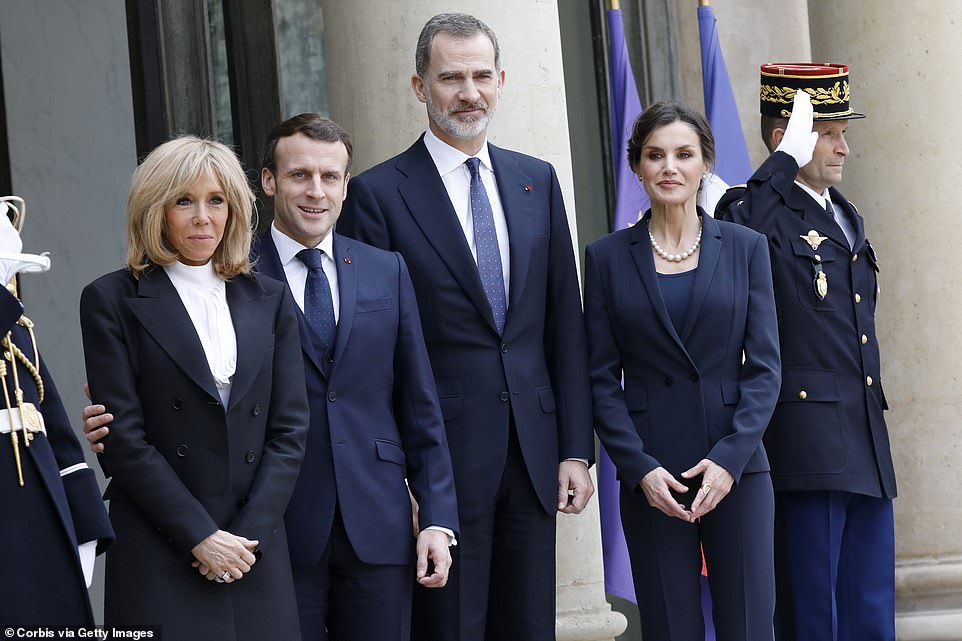 King Felipe VI has cancelled a meeting he was due to hold today with Council of Europe Secretary General Marija Pejcinovic, just a day after spending time with the French president and his wife 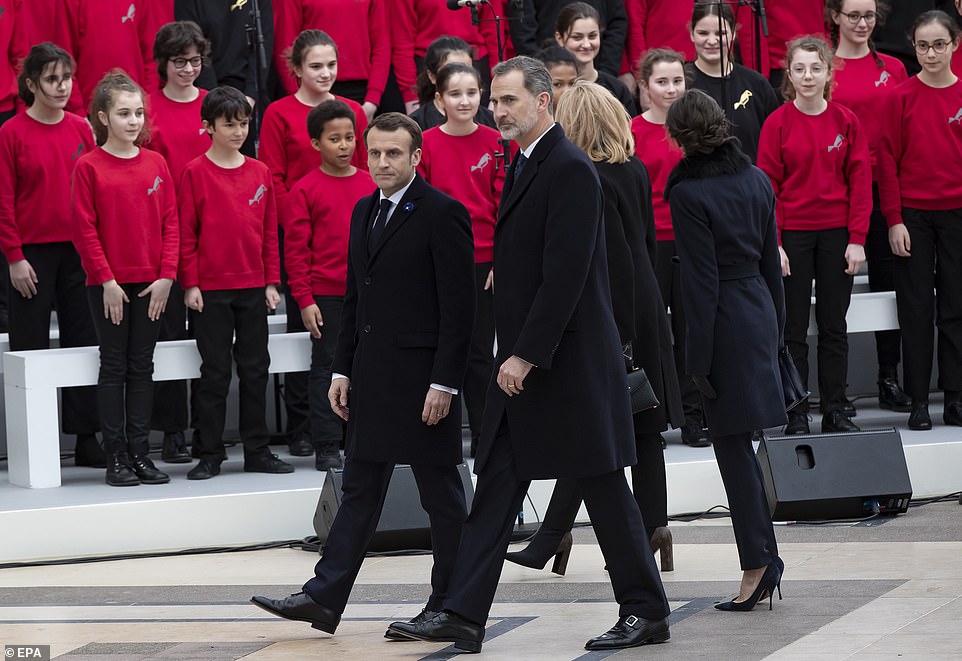 The royals took part in a ceremony to honour victims of terror attacks in Europe, on the 16th anniversary of Madrid attacks, at the Trocadero in Paris

King Felipe VI has cancelled a meeting he was due to hold today with Council of Europe Secretary General Marija Pejcinovic.

WHAT ARE THE SYMPTOMS OF CORONAVIRUS?

Like other coronaviruses, including those that cause the common cold and that triggered SARS, COVID-19 is a respiratory illness.

The most common symptoms are:

Although having a runny nose doesn’t rule out coronavirus, it doesn’t thus far appear to be a primary symptom.

Most people only become mildly ill, but the infection can turn serious and even deadly, especially for those who are older or have underlying health conditions.

In these cases, patients develop pneumonia, which can cause:

Avoid people with these symptoms. If you develop them, call your health care provider before going to the hospital or doctor, so they and you can prepare to minimize possible exposure if they suspect you have coronavirus.

On Wednesday the Spanish royals had lunch with French president Emmanuelle Macron and his wife at the Elysee Palace.

The number of people to die with coronavirus in Spain has now reached 86.

At 1pm today the number of coronavirus cases stood at 2968, 816 more than yesterday. Nearly 1,400 are in Madrid, where schools were ordered to shut yesterday for two weeks.

Real Madrid’s footballers were also put in quarantine today after it emerged a Real Madrid basketball player had tested positive for coronavirus.

Spain’s government underwent coronavirus testing today after the number of cases soared to 2,968.

It is up from 2,140 on Wednesday evening, with deaths leaping from 48 to 84 within the same time frame.

‘This morning, all members of the government will undergo testing,’ a statement said, indicating the results would be published later in the day.

‘The minister (Irene Montero) is in a good condition and second deputy prime minister Pablo Iglesias is also in quarantine due to the situation.’

Mrs Montero tested positive on Wednesday evening, three days after appearing at a mass march of some 120,000 people through Madrid for International Women’s Day.

A special cabinet meeting to discuss an emergency plan of action to respond to the crisis went ahead around 1200 GMT as planned, with Prime Minister Pedro Sanchez and 14 other ministers, it said.

However, all of Sanchez’s upcoming appointments would be conducted by video conference.

Spain has seen the number of infections spiral since the start of the week, becoming one of the worst-hit countries in Europe. Madrid has borne the brunt of the crisis with 1,388 infections and 38 deaths.

Meanwhile occupancy rates at Spanish hotels have fallen dramatically, with some hotels left empty, and there are ‘no new bookings’, according to a top official at Spain’s hotels and tourist accommodations federation CEHAT revealed.

‘A tsunami has arrived. A meteorite has fallen on us and we have to see how we survive,’ CEHAT Secretary General Ramon Estalella said, urging the Spanish government to take measures to avoid bankruptcies and layoffs at hotel companies. 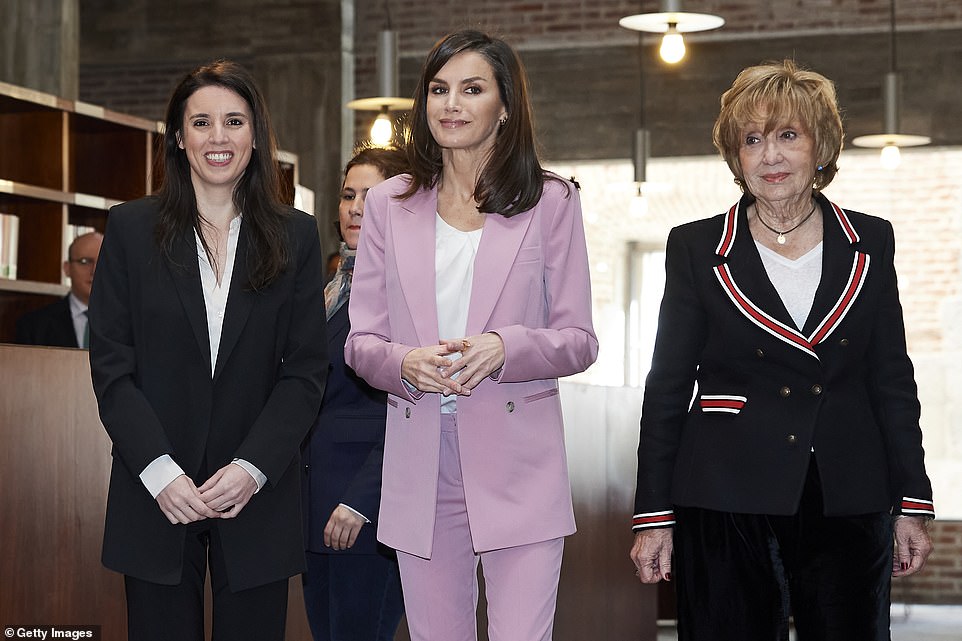 Queen Letizia is pictured with Mrs Montero, who has now been placed into quarantine, and the APRAM president Rocio Nieto 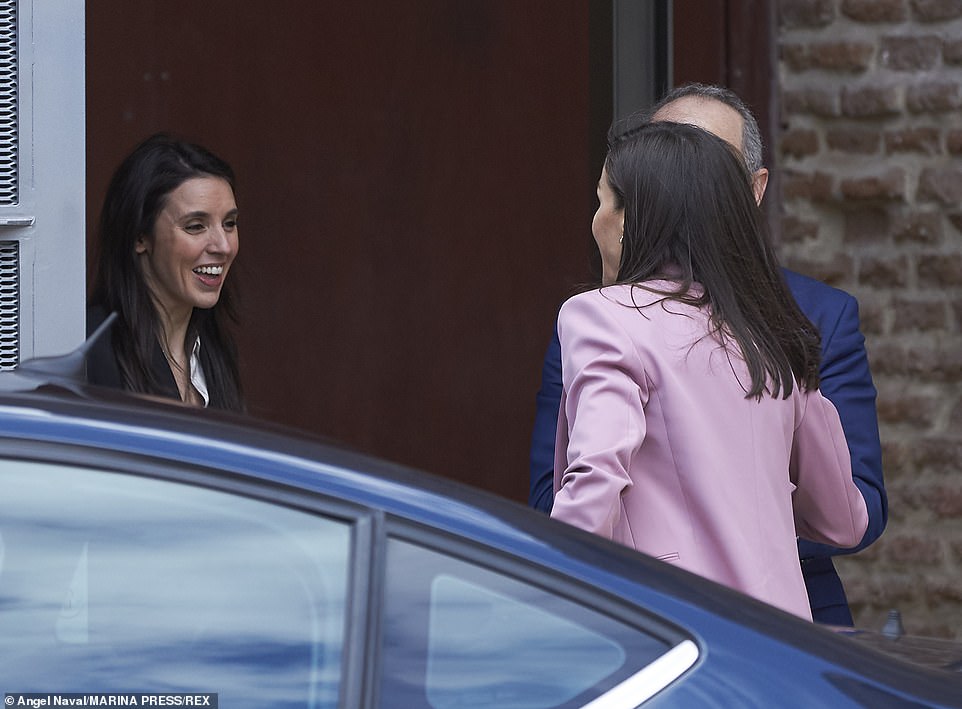 The pair spent a significant period of time together on Friday, March 6, before Mrs Montero started having symptoms and Queen Letizia travelled to France 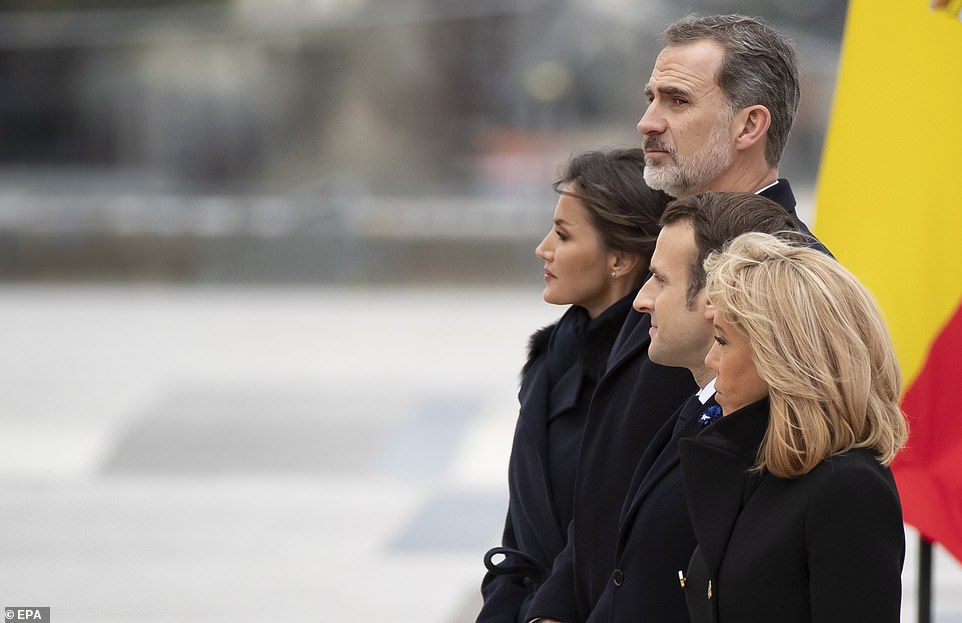 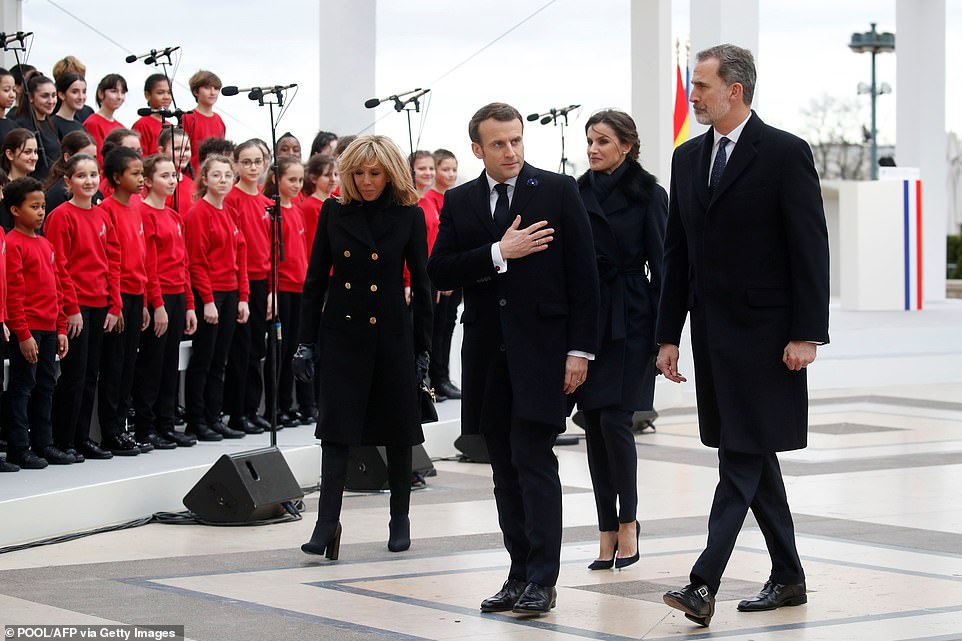 Spain’s government underwent coronavirus testing today after the number of cases soared to 2,968. But the royals travelled to France for a ceremony on Wednesday 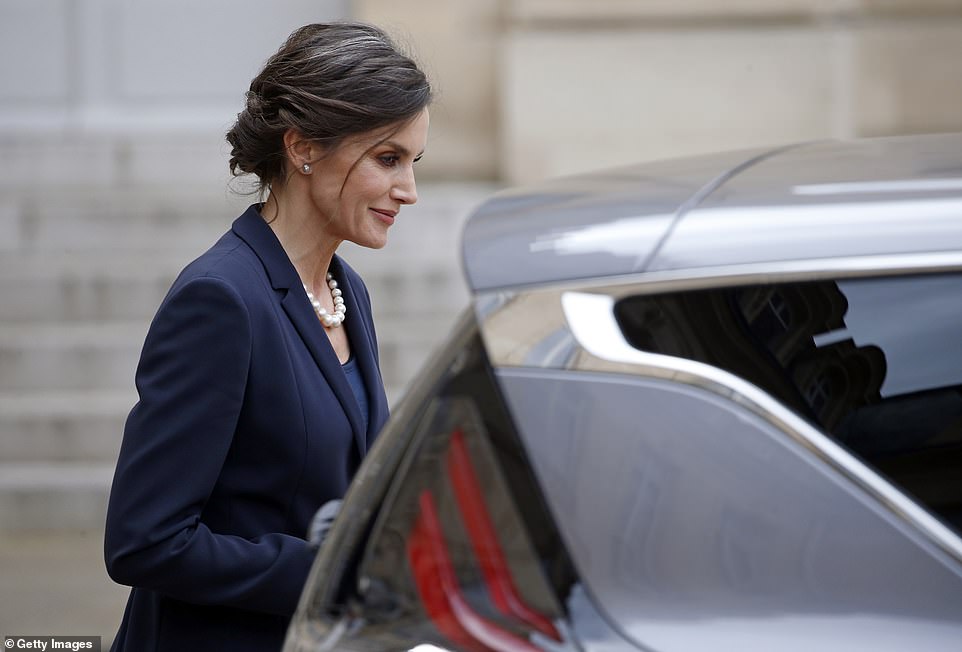 It is not yet known whether Queen Letizia has the virus, but she has been quarantined while they wait for the results of the test