They say beauty is in the eye of the beholder.

And for some, that principle may seem particularly apt for British photographer Alastair Philip Wiper’s new book – Unintended Beauty.

It sets out to challenge the common perception of beauty with Mr Wiper’s photographic eye sweeping across scenes not commonly thought of as aesthetically pleasing from the world of industry and science.

‘Something I want to do is challenge what people think of as beautiful,’ says Mr Wiper, ‘because there are a lot of things that you can say are ugly and beautiful at the same time. A lot of beautiful things should have a bit of ugliness to them.’

Do you agree with him?

Scroll down and gaze upon a selection of images from the book of a giant knitting machine, a slaughterhouse and more. 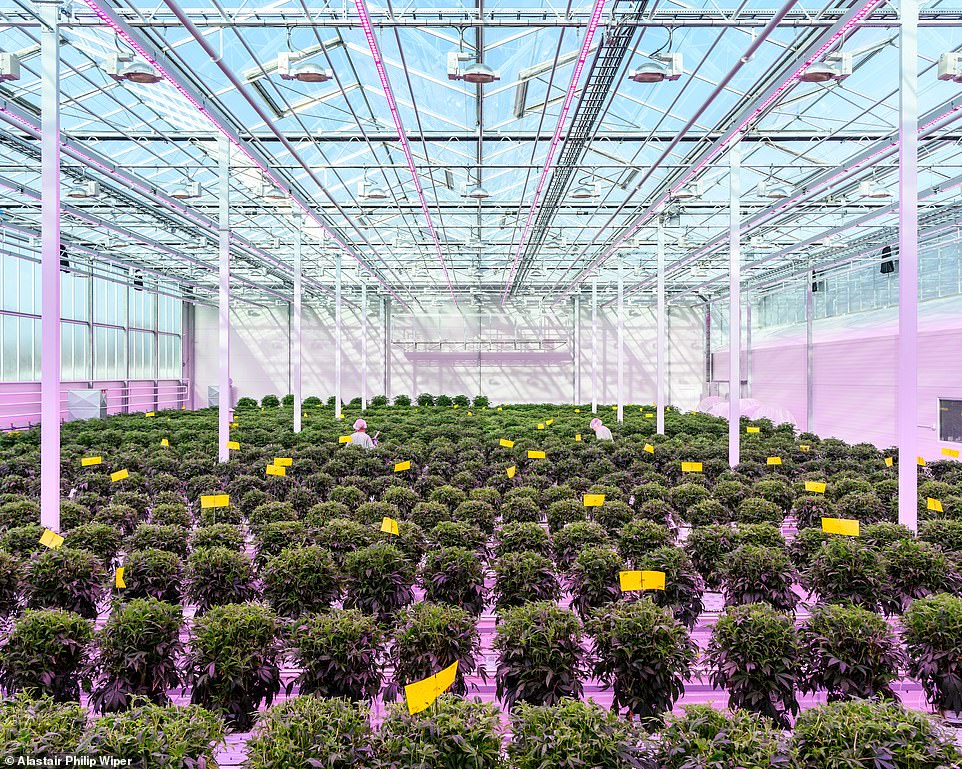 Aurora Nordic medicinal cannabis greenhouse, Denmark: Mads Pedersen, a third-generation tomato grower, is the owner of Scandinavia’s largest tomato-growing empire, Alfred Pedersen & Sons, the book explains. Around 2015 Mads realized that his infrastructure and know-how could be applied to growing medicinal cannabis. Mads’s new idea coincided with a huge surge in Danish public interest – and political debate – about medical cannabis, and, just as his plans were coming to fruition, the Danish parliament began issuing trial licenses to produce medical cannabis. Mads snapped up the first one and began building a 60,000-square-metre facility, the largest in Europe 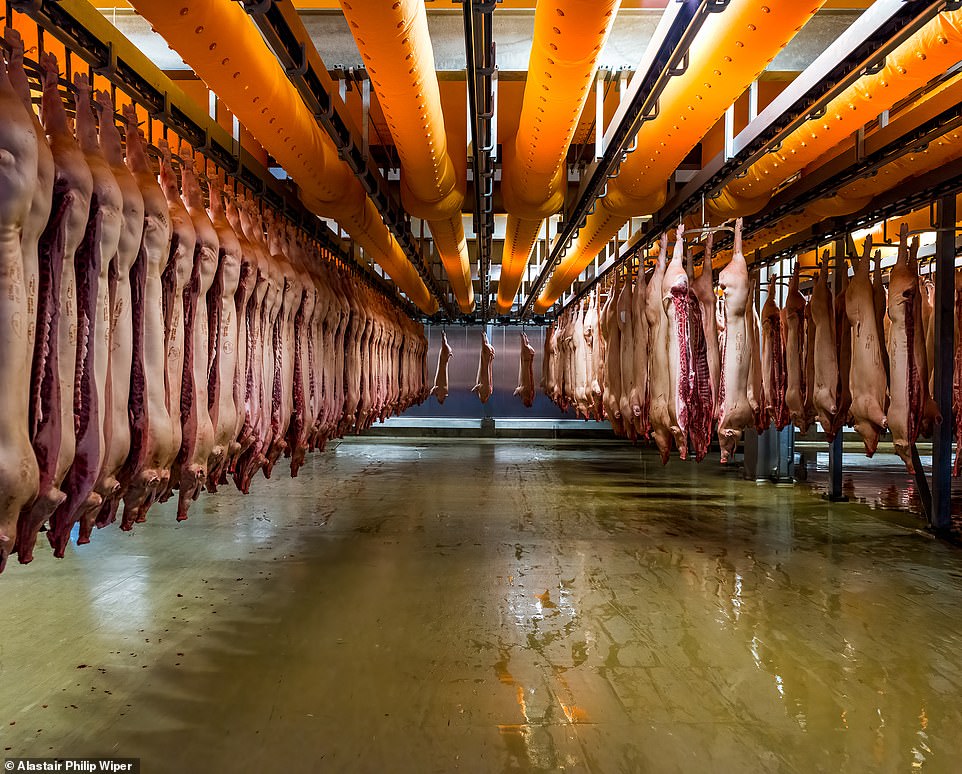 Danish Crown’s Horsens Slaughterhouse, Denmark: Completed in 2004, this slaughterhouse kills approximately 100,000 pigs a week, according to the book, making it one of the largest in the world. It employs 1,420 people and receives around 150 visitors per day. The slaughterhouse was designed with openness in mind – every step of the production, from the pigs arriving, to the slaughter itself, to the butchering and packaging, can be seen from a viewing gallery 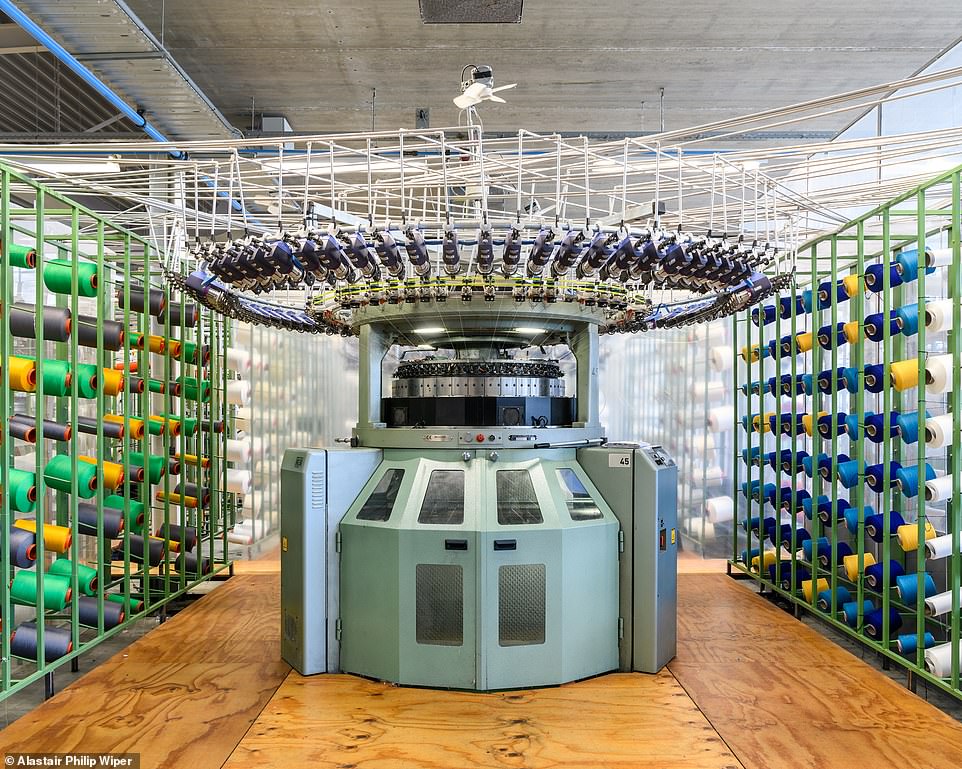 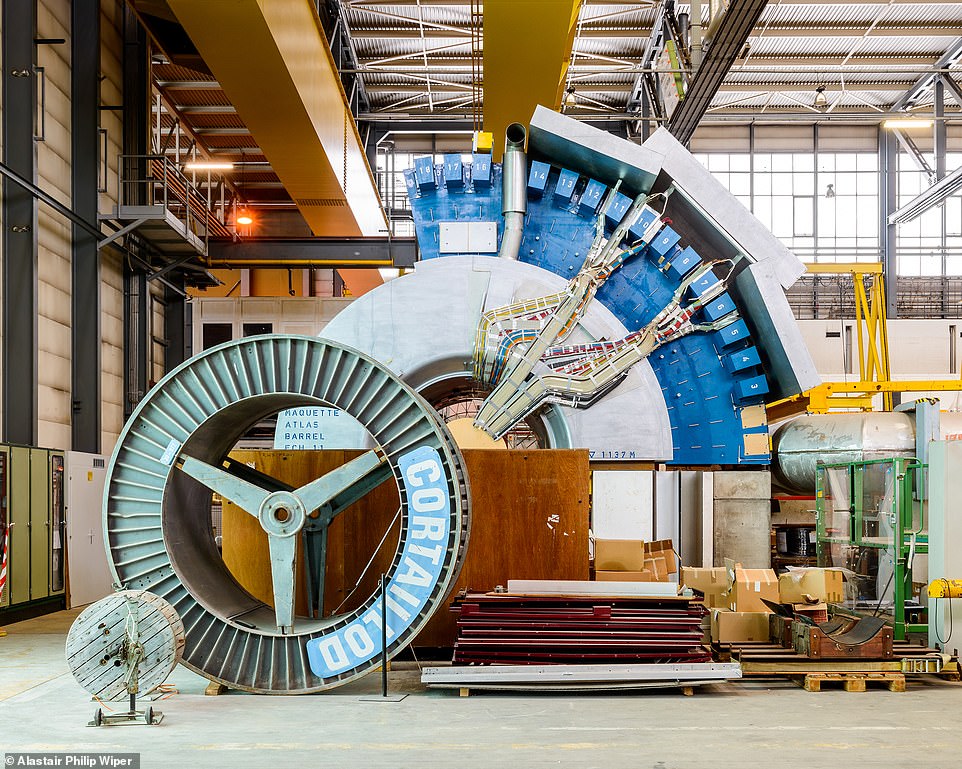 Plywood mock-up of part of the Atlas Detector, Cern, Switzerland: ‘The Atlas Detector is the largest of seven detectors on the Large Hadron Collider, and this model of a small part of the detector was used to test wiring scenarios before installation. I found it at the back of a warehouse gathering dust,’ Alastair reveals 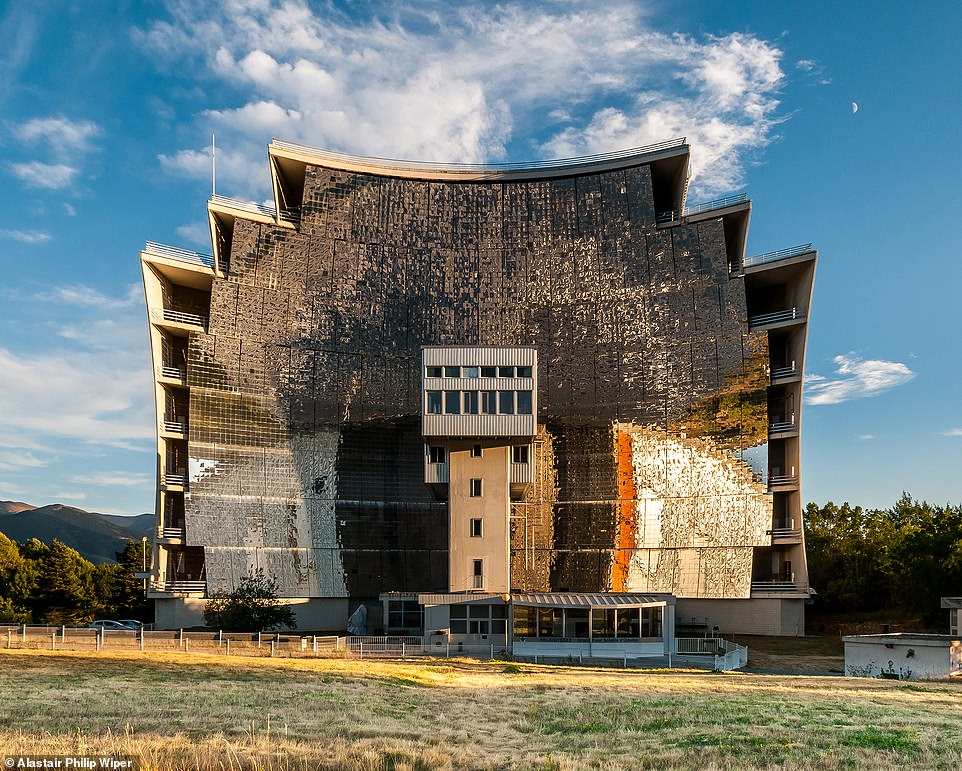 Odeillo Solar Furnace, France: Unintended Beauty says that this solar furnace opened in 1970 and is the largest in the world, working on the same principle as its older, smaller brother just down the road. The sun’s energy is reflected via a series of 9,600 mirrors and concentrated on one very small point to create extremely high temperatures, it explains. It is still used by space agencies like Nasa and the ESA as well as scientists and technology companies to research the effects of extremely high temperatures on certain materials for nuclear reactors and space vehicle re-entry, and to produce hydrogen and nanoparticles. In this photo, the grey structure in the centre of the reflector array is where the sun’s rays are focused onto a point about the size of a cooking pot, where temperatures reach 3,500C 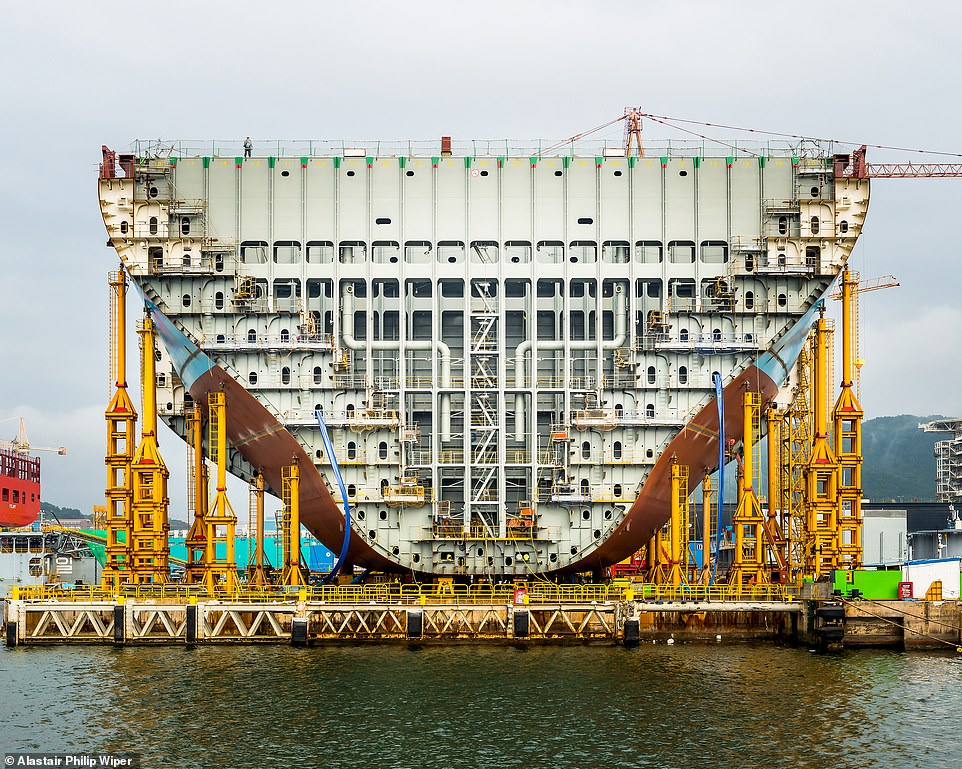 Maersk Triple E container ship under construction, Daewoo Shipbuilding & Marine Engineering, South Korea: Mr Wiper explains that when it was built the Maersk Triple E was the largest container ship in the world, with a capacity of 18,000 containers – enough space to transport 864 million bananas. He continues: ‘Twelve of these ships were in different stages of construction when I visited the DSME shipyard, where 46,000 people are building about 100 vessels and oil rigs at any time. It could reasonably be described as the world’s biggest Legoland. The ships are built in sections called megablocks, which are then lifted into place with cranes and welded together’ 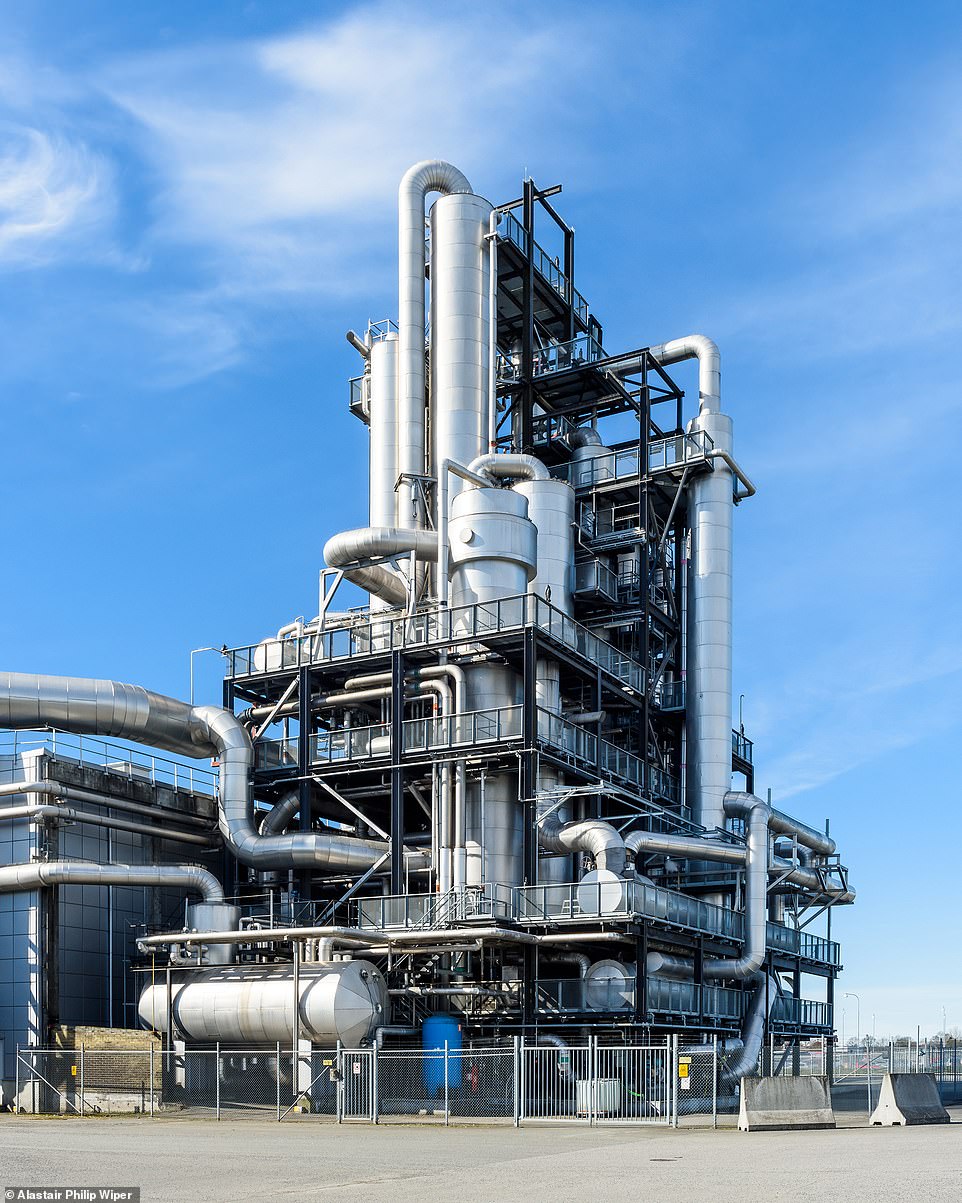 Absolut Vodka Distillery, Sweden: Established in 1879, Absolut Vodka is the third biggest spirit brand in the world, the book says, and all the 99 million litres produced every year are made here in Skåne, southern Sweden. Over one kilogram of wheat is used in each bottle of Absolut, all of it grown locally. The wheat is milled, blended into a mash with water for three hours, yeast is added and the mash then ferments for 48 hours, after which the alcohol level is 10 per cent. The mixture is then continuously distilled, and the resulting fine spirit is 96 per cent. It then moves to a bottling plant and is diluted to 40 per cent. The 11-storey-high storage warehouse in Åhus contains up to 13 million bottles at a time. This image was shot as part of a project in collaboration with human science strategic consultants ReD Associates. 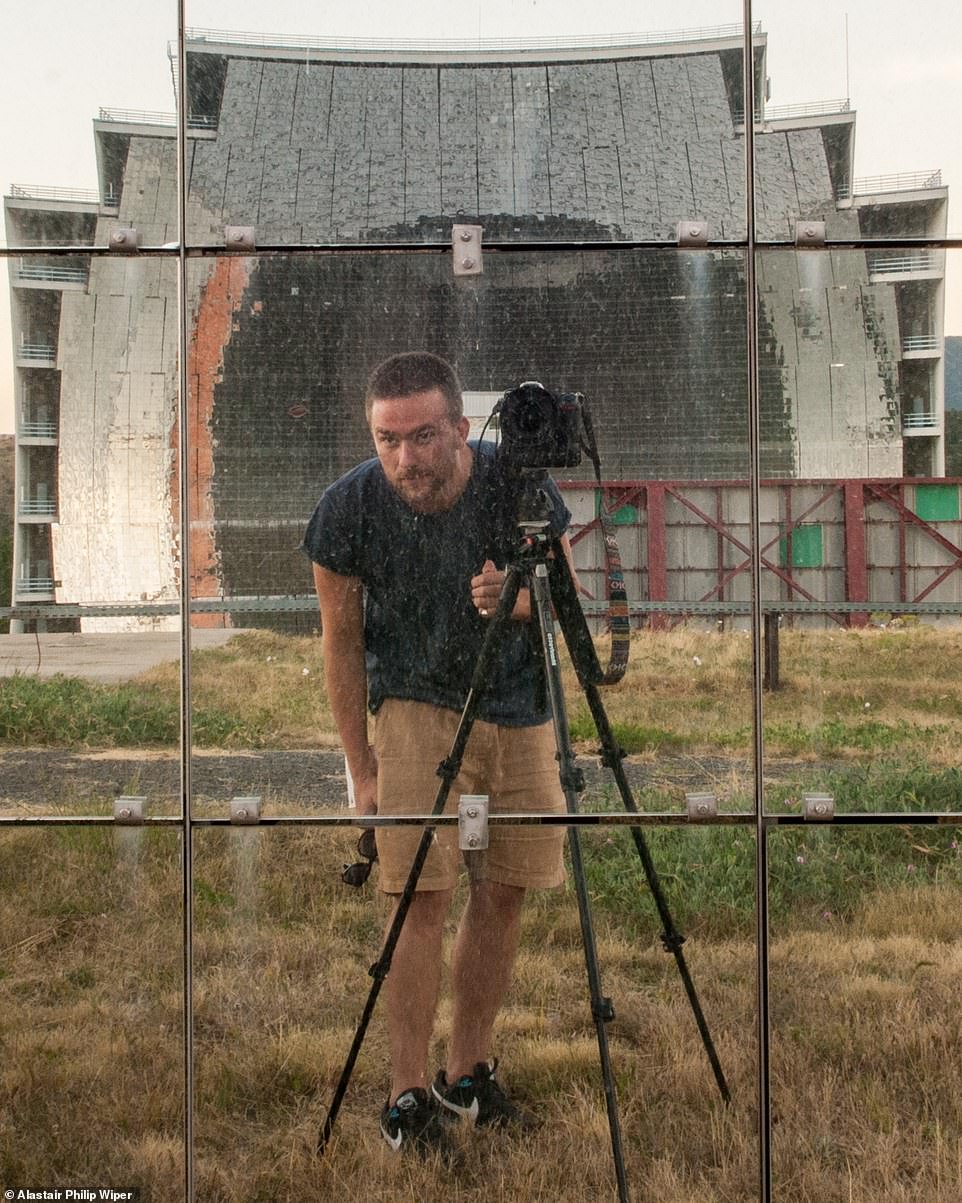 British photographer Alastair Philip Wiper (pictured in a self-portrait) says: ‘The title of the book Unintended Beauty is meant to be a bit provocative. A lot of beautiful things should have a bit of ugliness to them’ 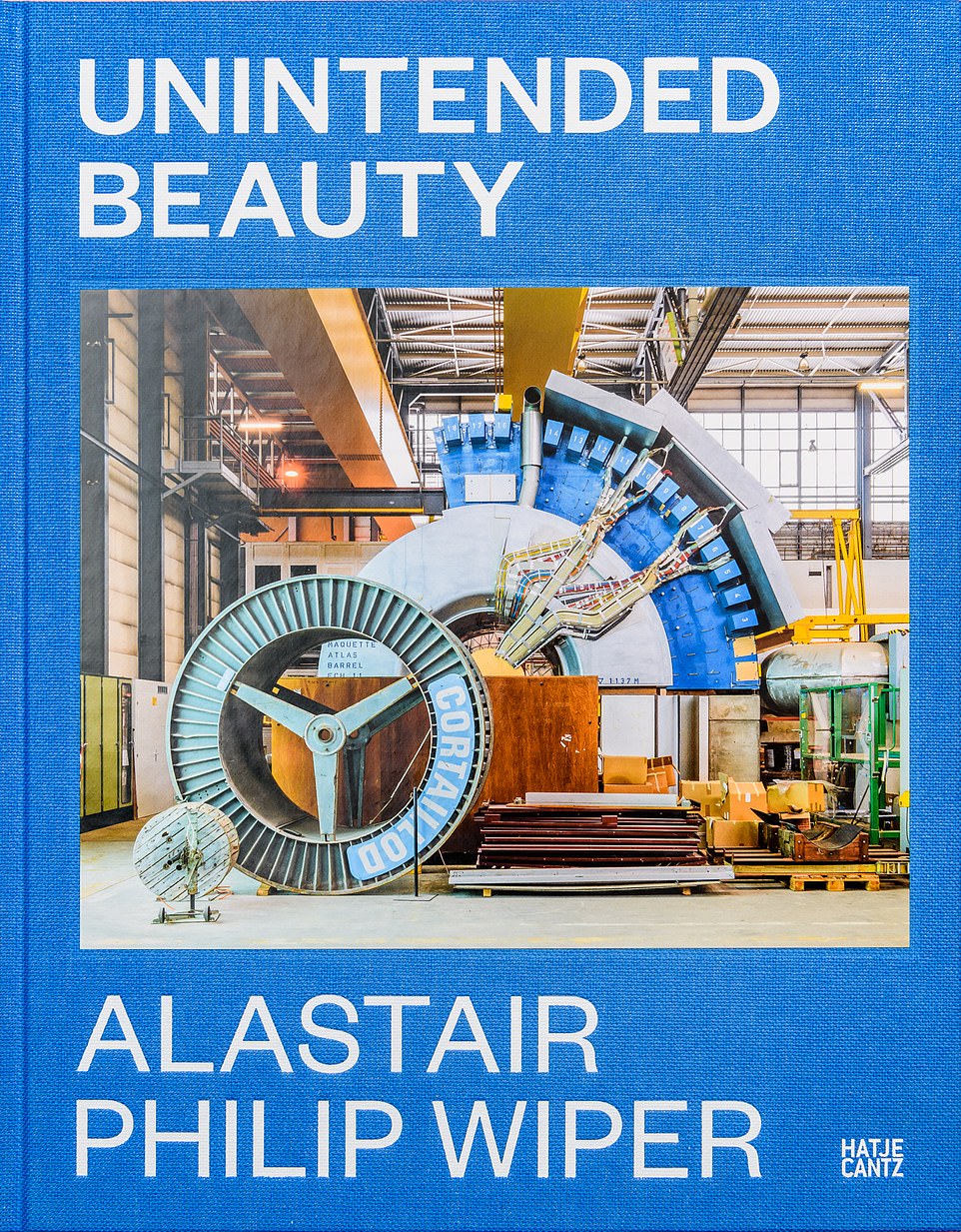 Unintended Beauty is published by Hatje Cantz, priced at 46 euros (£40)