Incredible images of the world’s most jaw-dropping churches, from Hawaii to Taiwan via England

Christians have given the world some of its most beautiful buildings.

As new book Amazing Churches Of The World, by Michael Kerrigan, shows, with 190 images of jaw-dropping places of worships, some of them in landscapes that are heavenly in their own right.

Leaf through its pages and you’ll gaze upon churches that are ornate, immense, intimate and bizarre, from a 56ft glass-shoe church in Taiwan to an octagonal chapel inside an Italian cave.

Michael writes: ‘A powerful ruler’s monument, an assertion of communal identity, a colonialist vaunt… a church is never really just a church. Some Christians feel that it ought to be, that they should be able to gather in each other’s homes or hired rooms – just as the Disciples did at Pentecost. To them, domes and spires, aisles and arched windows are so much frippery. They have a case, though where Christian leaders have preferred to take a more worldly role in wider society, the need for a more imposing public face was felt.

‘Scripturally justified or not, their decision has given the world some of its most beautiful buildings, its most splendid interiors, its most atmospheric spaces – an inspiration not just to Christians but also to humankind. And whatever vanities they may represent, churches can’t help but be uplifting.’

Scroll down to peruse MailOnline Travel’s selection of pictures from the compendium, with caption information courtesy of the author. 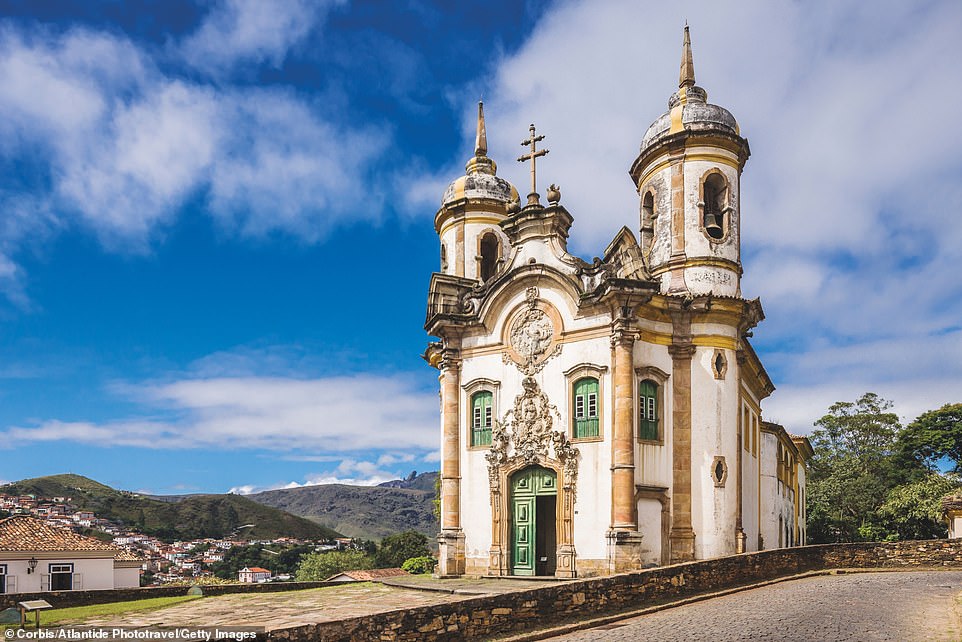 The Brazilian town of Ouro Preto’s very name (the Portuguese for ‘Black Gold’), and even more so its former title ‘Villa Rica’ (‘Rich Town’), sum up the historical heritage of this sometime mining centre, the book says. Suffice to say, it’s full of treasures, like this rococo church by local architect ‘Aleijadinho’ (Antonio Francisco Lisboa, 1730-1814) 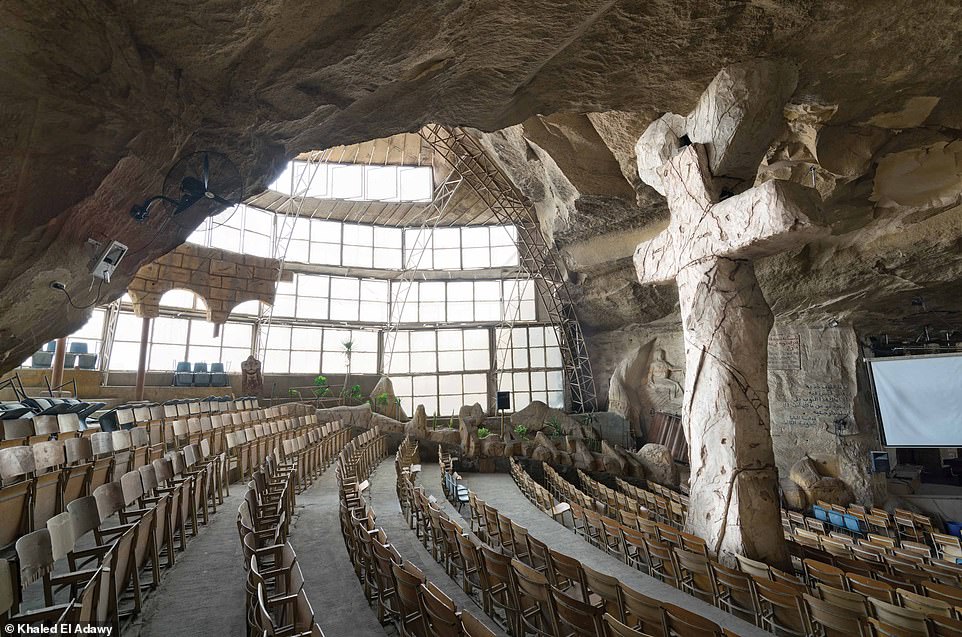 Simon the Tanner, a 10th-century Coptic saint, is best known for the story that he literally moved a mountain to demonstrate God’s power to a doubtful caliph. St Simon’s Church has been carved out of Cairo’s Mokattam Mountain, the exact feature that he is said to have moved, the book explains. There was a cave here before (discovered in 1974), but while it extended deep beneath the rock and stretched over a wide area, it was full to the roof with stones and had only a 3ft gap at its main entrance. Work began to open up and clear the cavern to create this cathedral in 1991 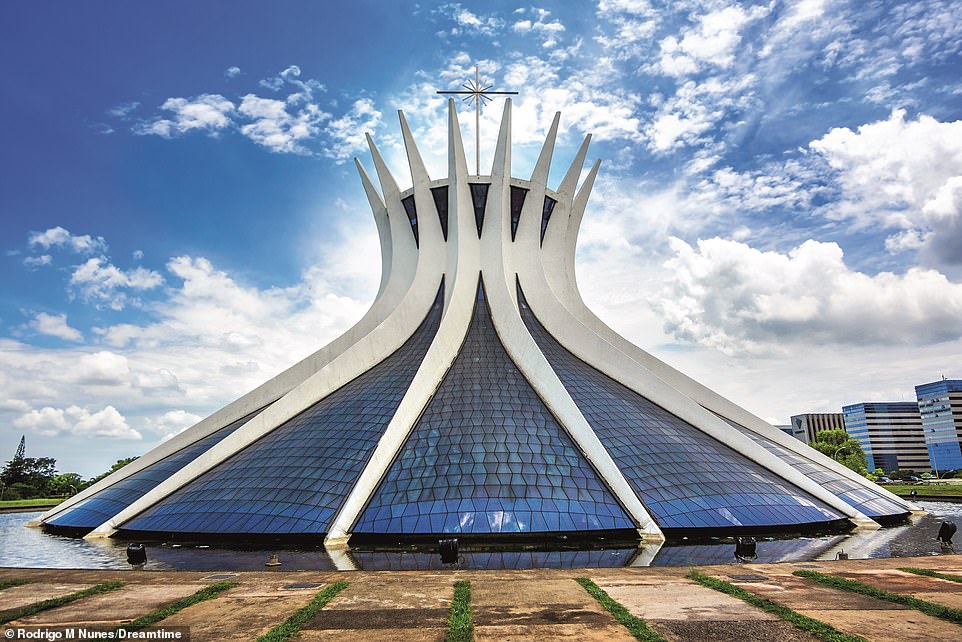 ‘I was attracted by the curve – the liberated, sensual curve suggested by the possibilities of new technology yet so often recalled in venerable old baroque churches,’ said the architectural genius Oscar Niemeyer (1907–2012), who brought the whole city of Brasilia into being. It’s appropriate that he should have been the one to design this house for the ultimate Creator, writes Michael 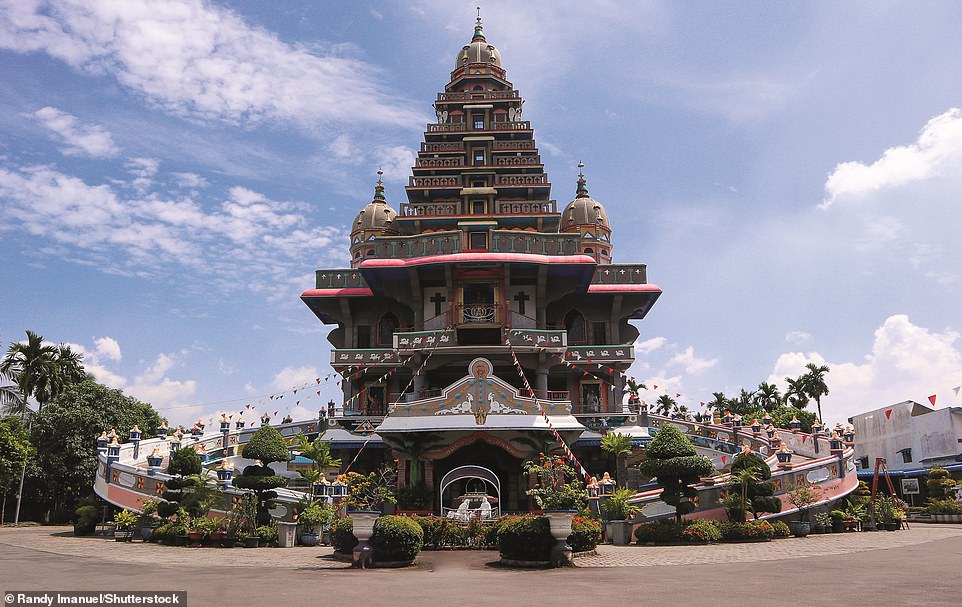 This is not a Buddhist temple or a Mughal mosque but a Catholic church – a Marian shrine [a shrine to the Virgin Mary], writes Michael. In Velangkanni, Tamil Nadu, India, in the 17th century, ‘Our Lady of Good Health’ [the Virgin Mary] appeared to a shepherd boy, after which a number of miraculous cures were worked. Her statue, sent to Indonesia in 2002, has been associated with further healings here, at what has since become an important place of pilgrimage 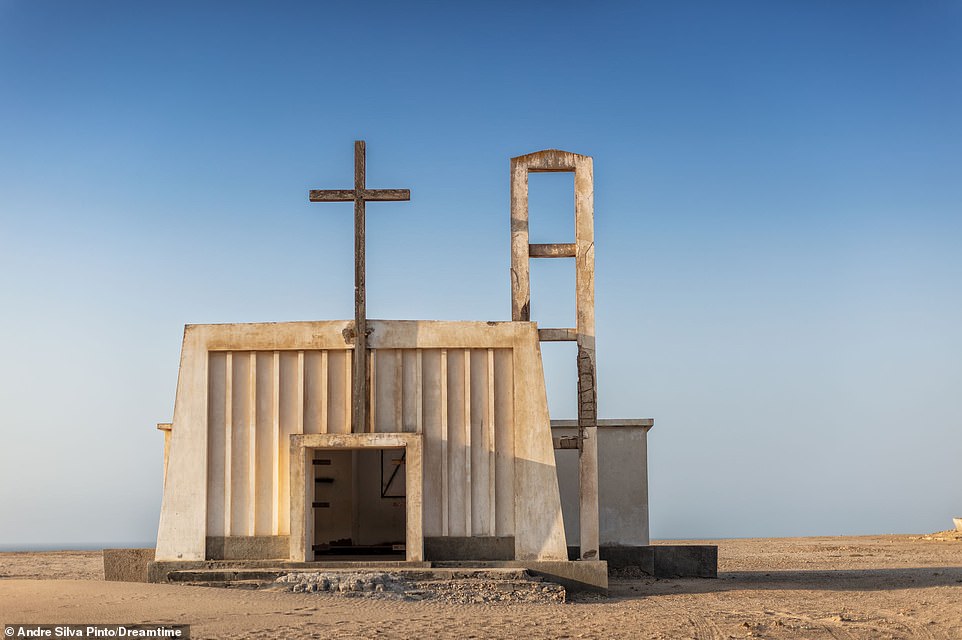 Catholicism has endured in Angola since the Portuguese colonists were driven out in 1975. Even so, a great many churches stand abandoned, such as this one in the country’s south-eastern desert 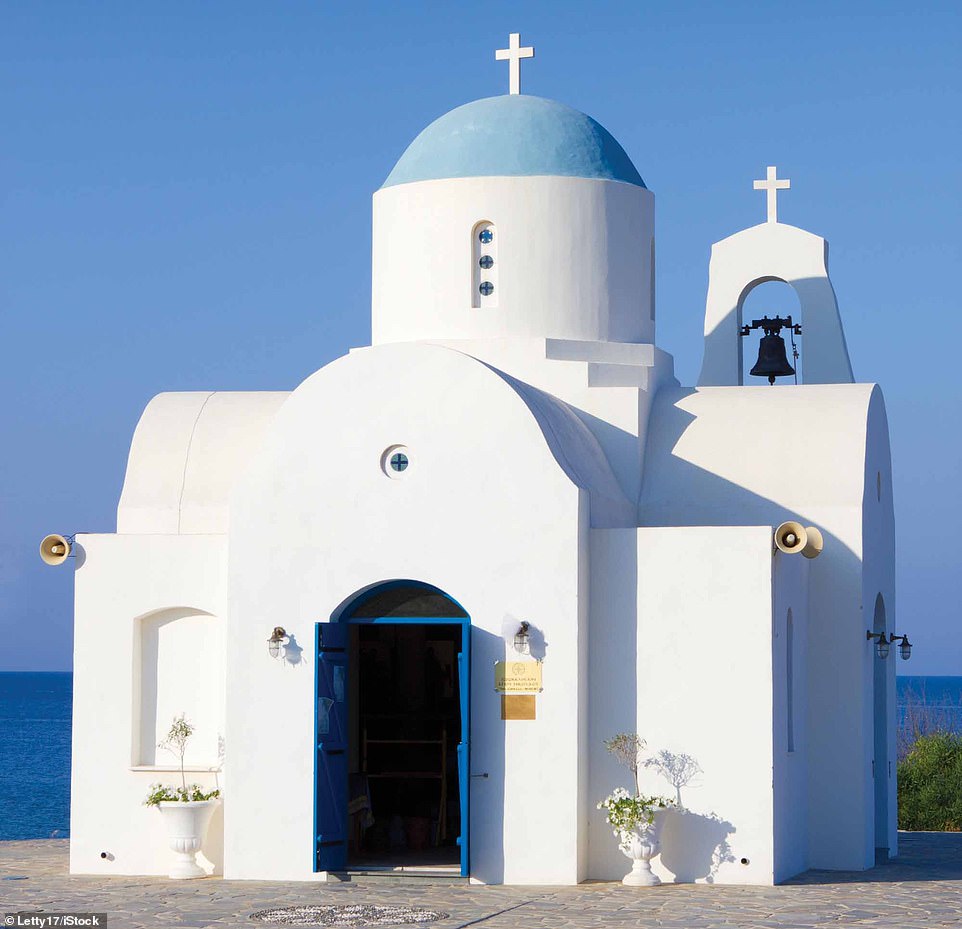 Agios Nikolaos Church (St Nicholas’s) is almost literally dazzling in its whiteness, set off as it is by the sky blue of its dome and door – as well as, of course, the blue of the sky itself and the azure Mediterranean in the background, says Michael. Whitewashing was introduced as a way of reflecting heat – here an otherwise ordinary little church is transfigured into something miraculously beautiful 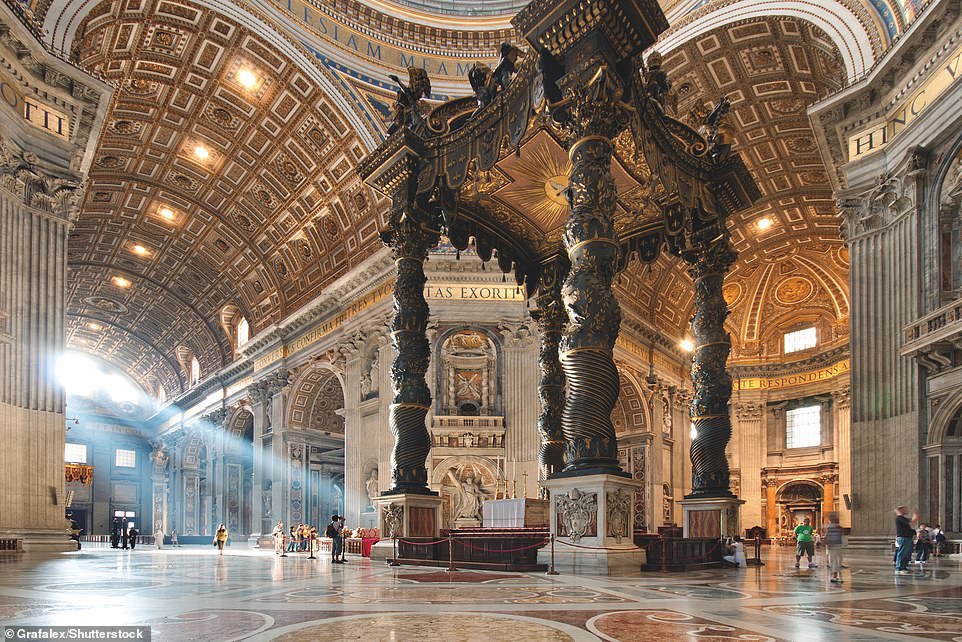 The ultimate in churches, the ultimate emblem of the Catholic faith – for better but also for worse, it has been suggested, writes Michael. Built on the site where the martyred St Peter’s bones had, tradition says, been laid, St Peter’s Basilica, completed in 1626, brought together a star-studded cast of Italian Renaissance architects, including Donato Bramante, Michelangelo and – a generation later – Gian Lorenzo Bernini. His astonishing baldacchino (above) canopies the papal altar and St Peter’s bones 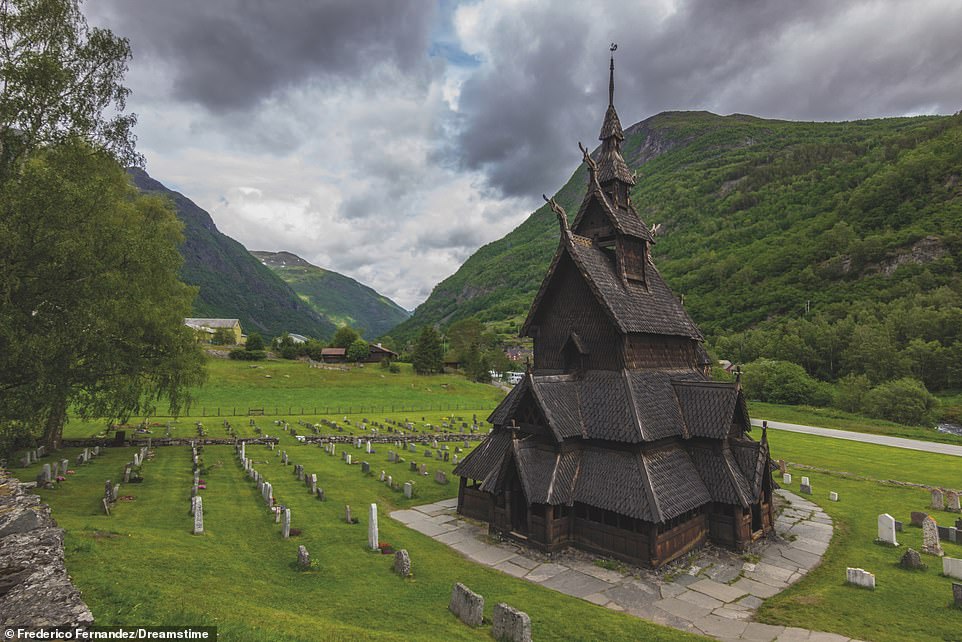 Hundreds of ‘stave churches’ like this were built across Norway in the 12th and 13th centuries, reveals Michael. All-wooden in construction, they had timber frames, were walled with interlocking planks (or ‘staves’) and roofed with wooden shingles. Carved dragon-heads give the gables on this one a ‘Viking’ look. It’s now part of the Lutheran Church of Norway 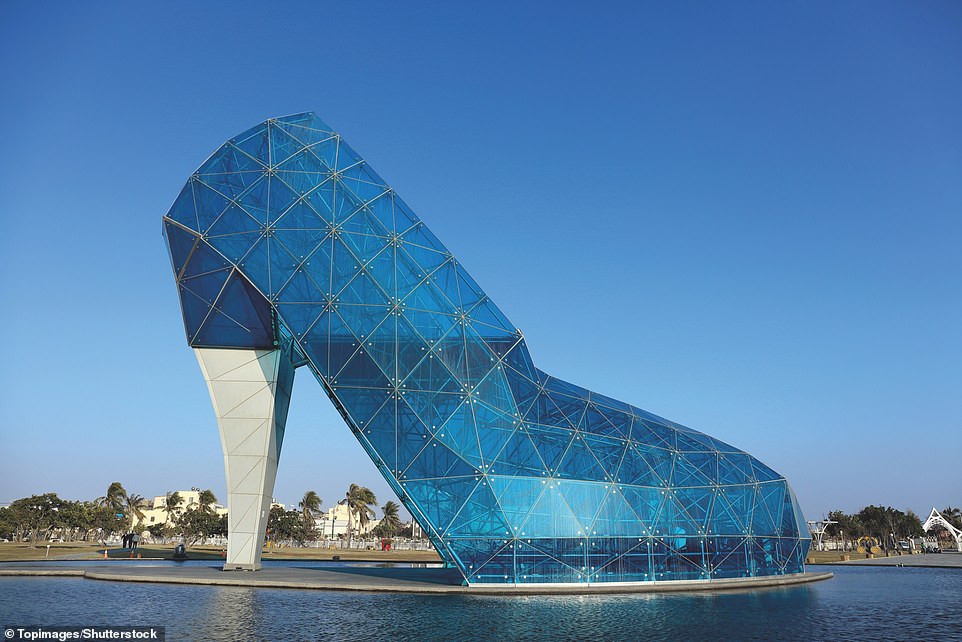 Taiwan, the Nationalist-ruled Republic of China, broke away from the Communist ‘People’s Republic’ in 1949, writes Michael. Its existence has been an irritant to the Beijing authorities ever since. Highly urbanized, and strongly orientated to the West, it has never been abashed about its eager embrace of consumerism. This 17m (56ft) shoe in glass and concrete caters to young couples in Budai Township. It’s apparently the biggest high-heel-shaped building in the world 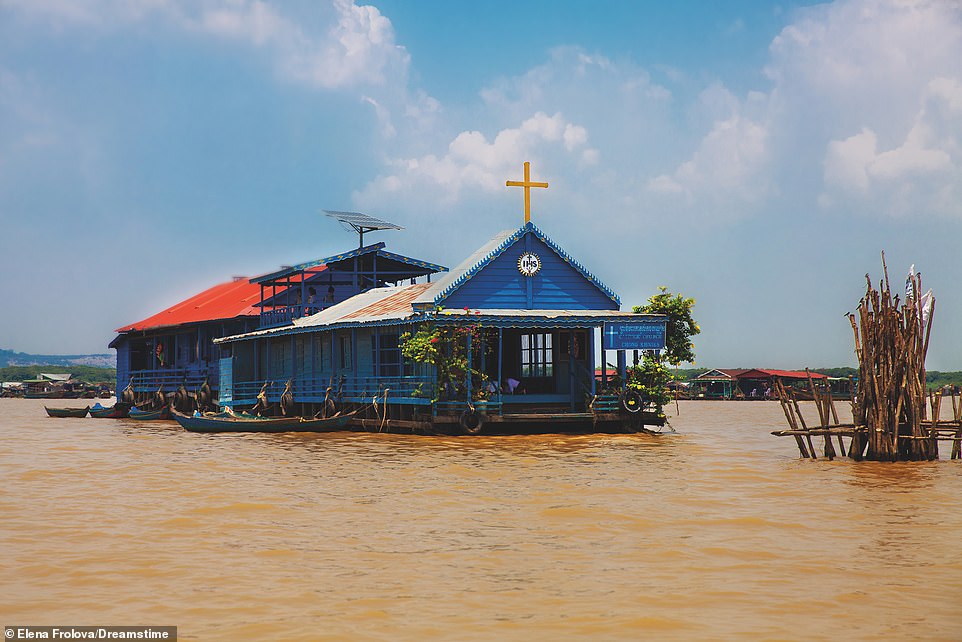 Something like a million people live in the various floating villages scattered along the shores of Tonlé Sap in the Mekong Basin, reveals Michael. They fish in the lake’s waters and grow rice along its swampy margins. Otherwise, they lead normal lives – albeit on the water. Not just their homes, but their schools and churches are built on rafts 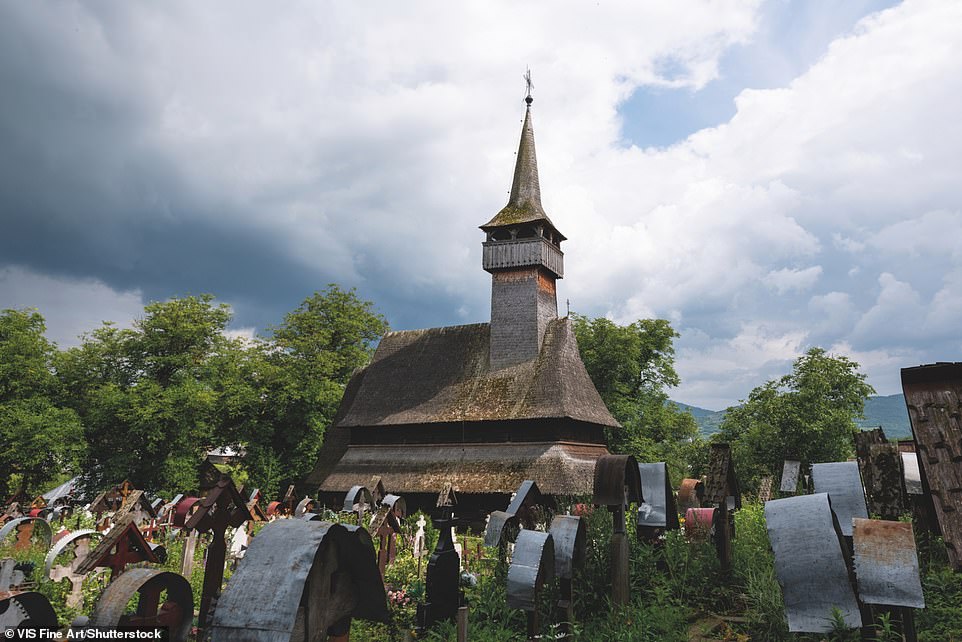 The Maramureș area of northern Romania has almost a hundred traditional wood-built churches, writes Michael. They’re made from logs, rather than from planking or from boards. Squat and often very small, this kind of building is marked out by its slim, shapely bell-tower and a roof that strikes the outsider as seeming too big for the church. Inside they tend to be decorated with (often rough and ready) wall paintings 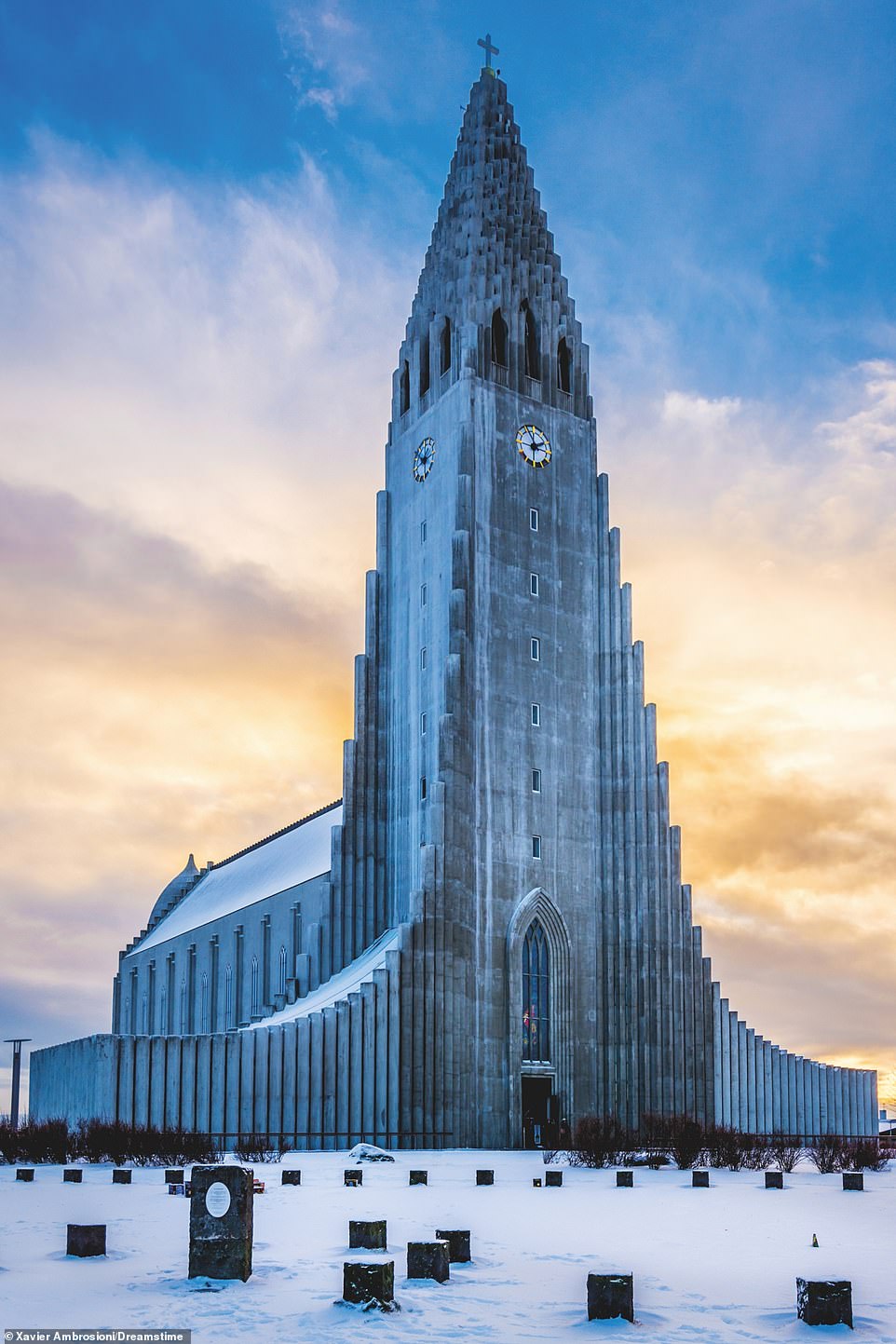 Michael writes: It could almost be a mountain or a rocky crag, its surface stepped by erosion or striated by glacial abrasure as it rises up out of the icy earth, its stone face blue with cold against a golden evening sky. Standing 74.5m (244ft) tall, Iceland’s leading Lutheran church, completed in 1986, towers over the country’s capital city 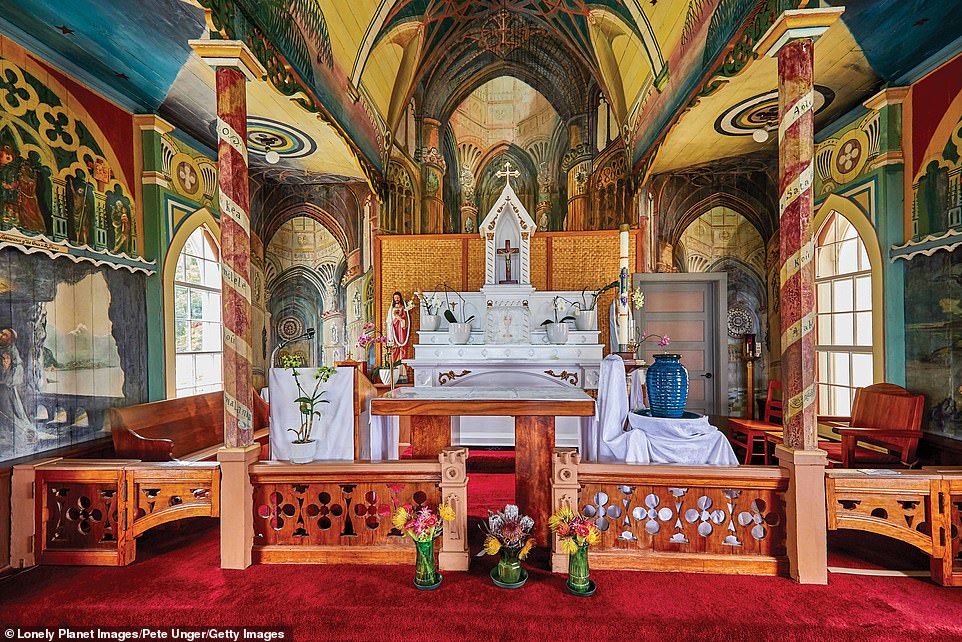 In the early 1900s, writes Michael, Father John Veighe, parish priest of Honaunau, took it upon himself to repaint the inside of his church. Not just a lick of magnolia, though, he created a spectacular neo-Gothic phantasmagoria, with trompe l’oeil arches, vaulting and beautifully painted frescos, making a soaring, spacious impression of a medieval cathedral out of his boxy, modern, wood-built church 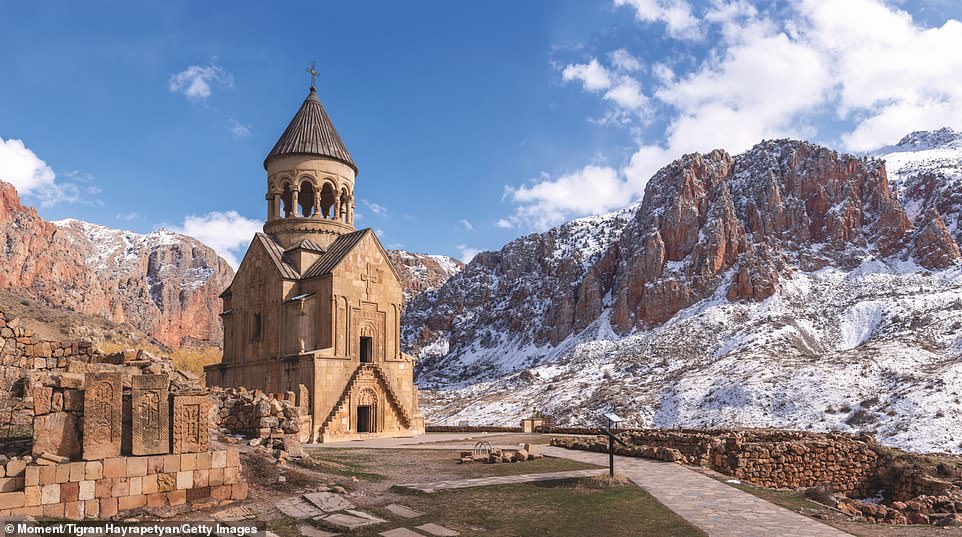 Spectacularly situated in the mountains south of Lake Sevan, writes Michael, the Noravank complex dates back to the 14th century. It belongs to the Armenian Apostolic Church, a branch of Eastern Orthodoxy. Dedicated to Surb Ashvatsatsin, the Holy Mother of God, this church was built in 1339. Its designer, Momik, was distinguished as a sculptor as well as for his architecture – and his creation here does look as if it’s been carved out of the valley’s virgin stone. Reliefs above the doors on the western side, with its converging steps, show the Virgin Mary flanked by the Archangels Michael and Gabriel and Christ, with Saints Peter and Paul 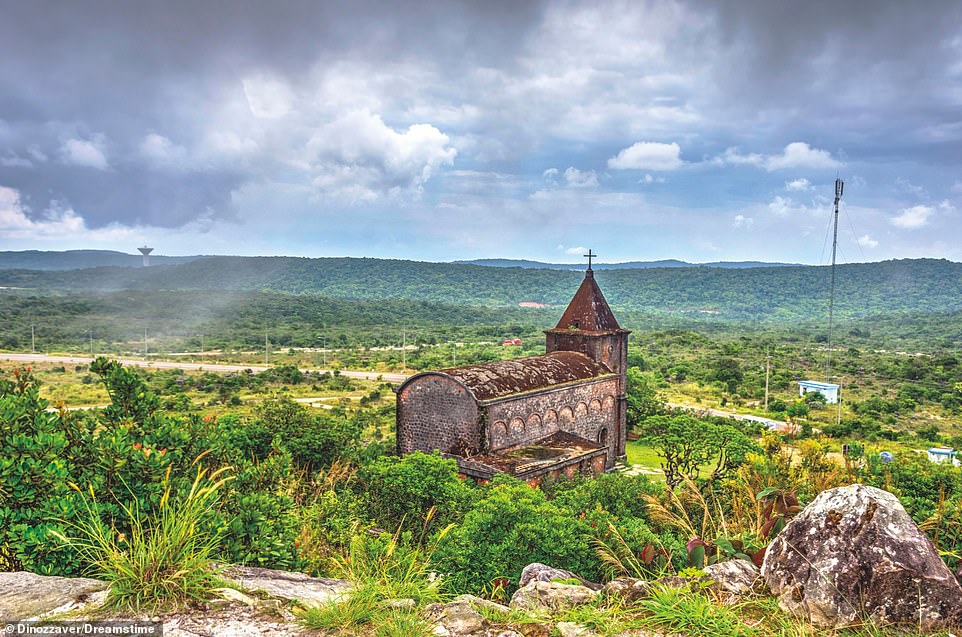 Standing 1,048m (almost 3,500ft) above sea level, southern Cambodia’s Bokor Mountain summit offers some relief from the tropical heat, writes Michael. Hence its development by the French colonialists of the 19th century as a ‘hill station’ – a place they could escape to from their sweaty, sultry city of Phnom Penh. This Catholic church offered a spiritual centre for what was, until the 1940s, a bustling resort 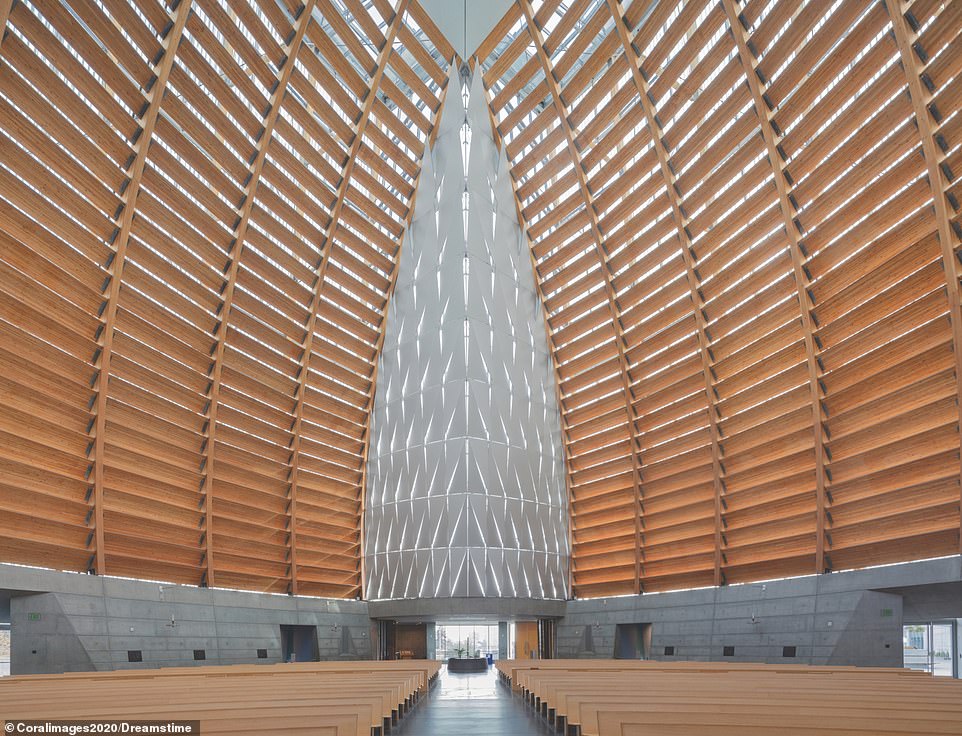 Christ The Light is the first cathedral built entirely in the 21st century, and replaced Oakland’s Cathedral of Saint Francis de Sales, severely damaged in an earthquake in 1989. Architect Craig W. Harman said that he sought the effect of light filtering down ‘through a canopy of redwood trees’, explains Michael 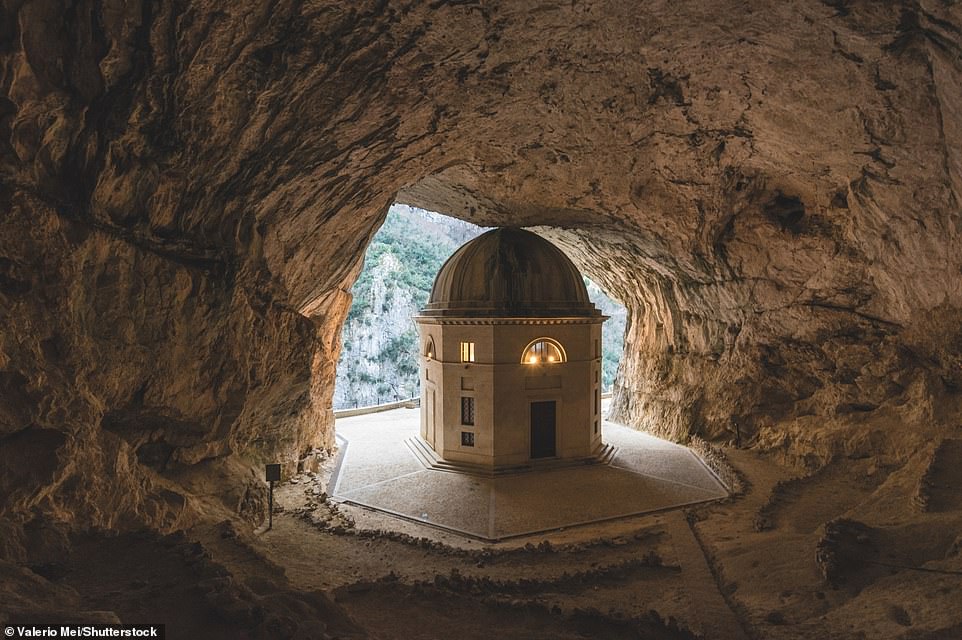 Tucked in beneath the raking roof of a limestone cave in the Apennines, this octagonal chapel was constructed as a ‘Refuge of Sinners’, writes Michael. Built in 1828, it was commissioned by Pope (and local boy) Leo XII (1760–1829) and designed by the celebrated neoclassical architect Giuseppe Valadier (1762–1839) 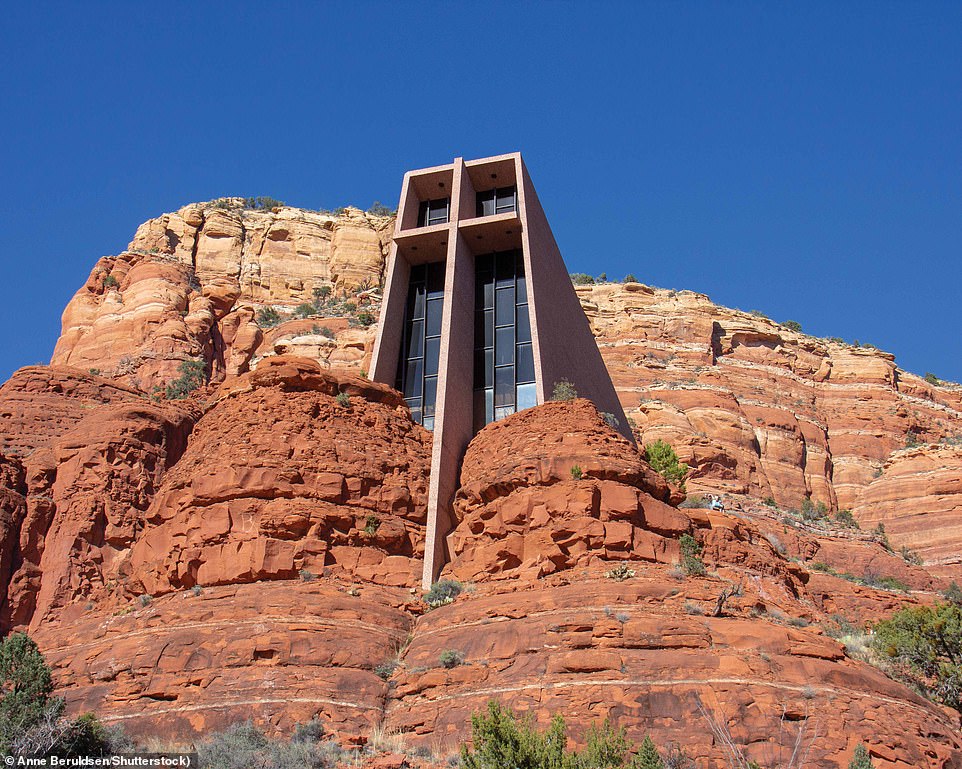 A visit to New York in the 1930s inspired Marguerite Brunswig Staude twice over, writes Michael. As a Catholic, she was thrilled by the grandeur of St Patrick’s Cathedral. As a sculptor, she revelled in the technological achievement of the Empire State Building. She came away with the hope of a design so sublime that it would almost compel reverence – ‘that God may come to life in the souls of all men and be a living reality’. It’s hard to imagine a more stunning church in a more spectacular setting than this chapel, carved into one of the red rock bluffs of Staude’s home state. Built between 1955 and 1956, it became a Catholic chapel, but has no services – its builder wanted it to be a place for general, non-denominational prayer and reflection

Church Of St Mary and All Saints, Chesterfield, UK 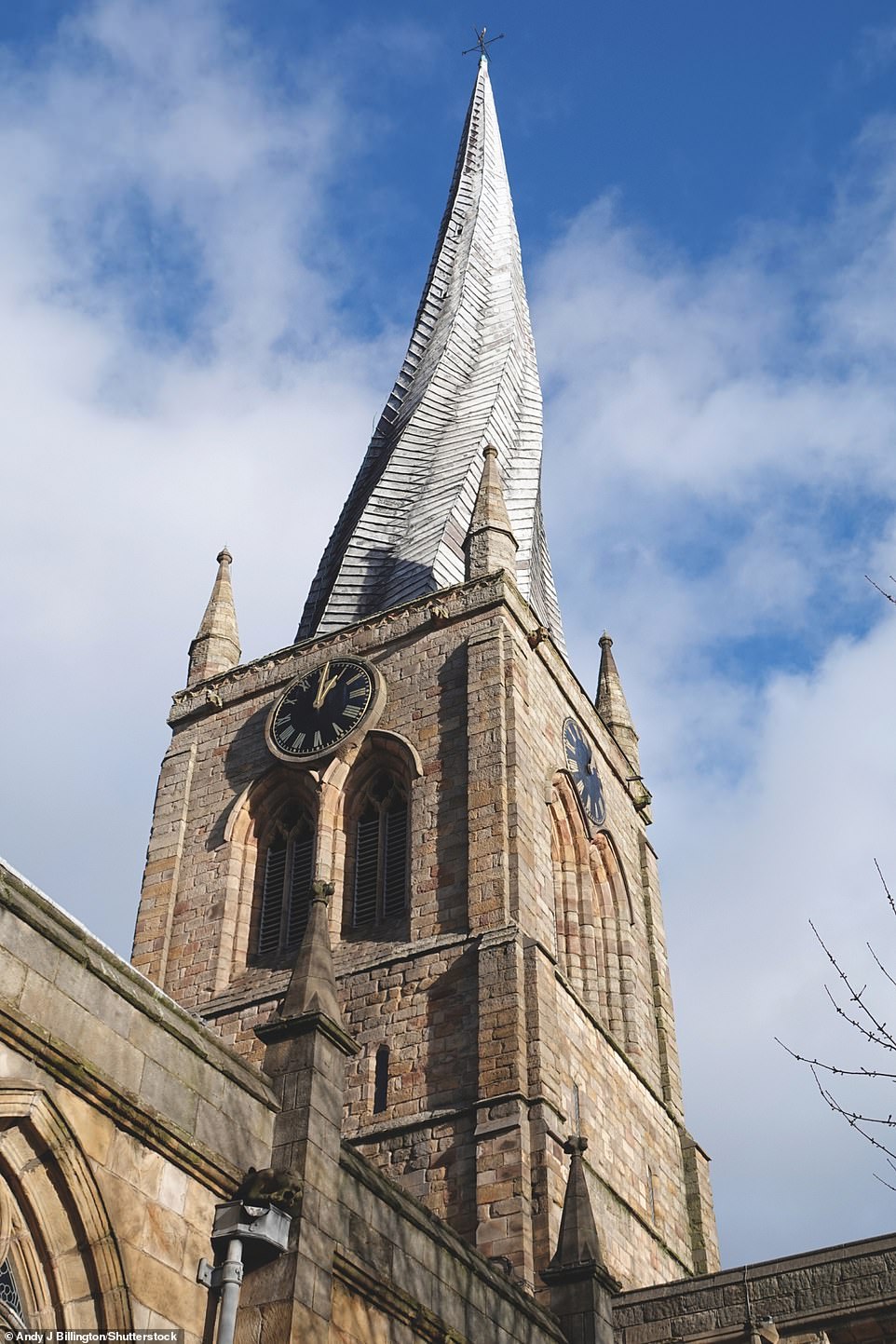 An unmistakable landmark, the crooked spire of the Church Of St Mary and All Saints in Chesterfield is believed to have been caused by the action of the summer sun on the warmer, southern side, which warped the roof’s lead covering and pulled it out of true, reveals Michael. There’s believed to have been a church here since the end of the 9th century

Church Of The Holy Sepulchre, Jerusalem 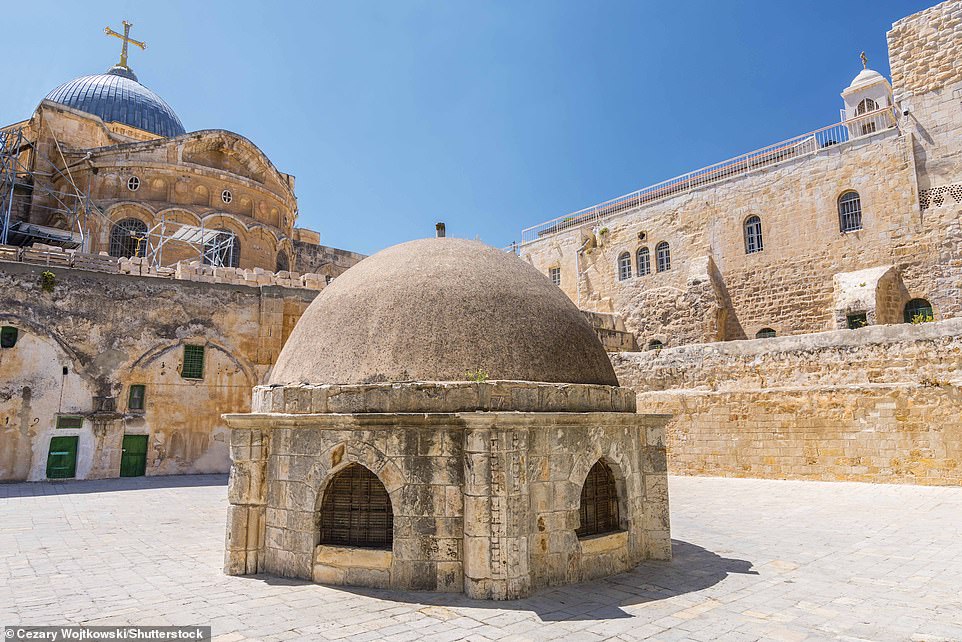 No shrine could be more sacred than this, writes Michael. The Holy Sepulchre encompasses not just the summit of Mount Calvary, where Christ was crucified, but also the tomb in which his tortured corpse was laid. His Resurrection on the third day was, of course, to be the founding miracle of the Christian faith, so the church is naturally a magnet for pilgrims. There’s a whole complex of buildings here, including a beautifully decorated Coptic chapel (opposite) and, on the roof, the Deir es-Sultan monastery, plus the 12th-century Armenian Chapel of St Helena 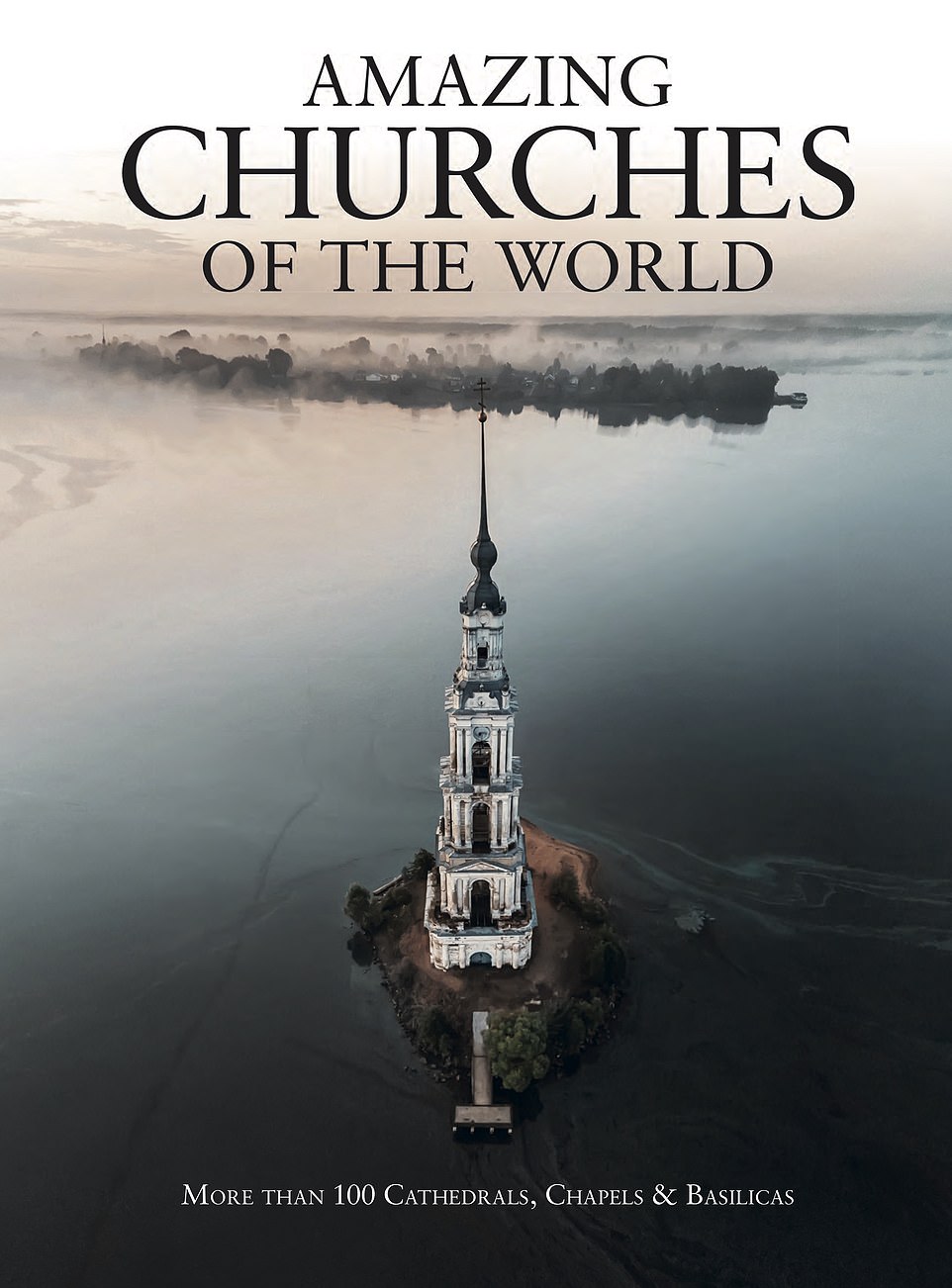 All images are taken from the book Amazing Churches Of The World by Michael Kerrigan (ISBN 978-1-78274-983-7) published by Amber Books and available from bookshops and online booksellers (RRP £19.99)